Join us Birkie Week for a special Redbery author event!  Ryan Rodgers, author of Winter's Children: a Celebration of Nordic Skiing will be at Redbery on Wednesday, February 23rd, 4-5:30pm.

The story of Nordic skiing in the Midwest--its origins and history, its star athletes and races, and its place in the region's social fabric and the nation's winter recreation

In the winter of 1841, a Norwegian immigrant in Wisconsin strapped on a pair of wooden boards and set off across the snow to buy flour--leaving tracks that perplexed his neighbors and marked the arrival of Nordic skiing in America. To this day, the Midwest is the nation's epicenter of cross-country skiing, sporting a history as replete with athleticism and competitive spirit as it is steeped in old-world lore and cold-world practicality. This history unfolds in full for the first time in Winter's Children.

Nordic skiing first took hold as a sport in the Upper Midwest at the end of the nineteenth century, giving rise to an early ski league and a host of star athletes. With the arrival of a pair of brothers from Telemark, Norway, the world's best skiers at the time, the sport--and the ski manufacturing industry--reached new heights in Minnesota, only to see its fortunes fall after World War II, when downhill skiing surged in popularity. In Winter's Children Ryan Rodgers traces the rise and fall of

Nordic skiing in the Midwest from its introduction in the late 1800s to its uncertain future in today's rapidly changing climate. Along the way he profiles the sport's stars and stalwarts, from working-class Norwegian immigrants with a near-spiritual reverence for cross-country skiing to Americans passionately committed to the virtues of competitive sport, and he chronicles races like the thrilling 1938 Arrowhead Derby (which ran from Duluth to St. Paul over five days) and the American Birkebeiner, the nation's largest cross-country event, which takes place every year in northern Wisconsin, snowpack permitting.

Generously illustrated with vintage photography and ski posters, and featuring firsthand observations drawn from interviews, Winter's Children is an engaging look at the earliest ski teams and touring clubs; the evolution of cross-country skis, gear, and fashion; and the ambitious and ongoing effort to establish and maintain a vast trail network across the Minnesota state park system.

The story of Nordic skiing in the Midwest—its origins and history, its star athletes and races, and its place in the region’s social fabric and the nation’s winter recreation

In the winter of 1841, a Norwegian immigrant in Wisconsin strapped on a pair of wooden boards and set off across the snow to buy flour—leaving tracks that perplexed his nei 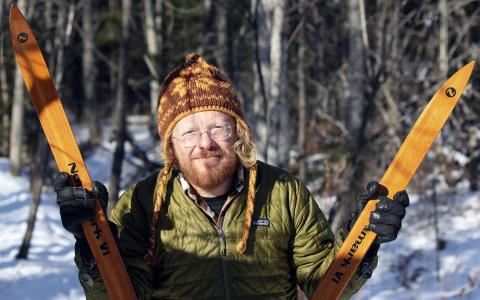