The Dickens Boy: A Novel (Hardcover) 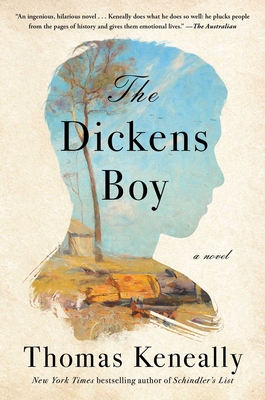 The award-winning author of modern classics such as Schindler’s List and Napoleon’s Last Island is at his triumphant best with this “engrossing and transporting” (Financial Times) novel about the adventures of Charles Dickens’s son in the Australian Outback during the 1860s.

Edward Dickens, the tenth child of England’s most famous author Charles Dickens, has consistently let his parents down. Unable to apply himself at school and adrift in life, the teenaged boy is sent to Australia in the hopes that he can make something of himself—or at least fail out of the public eye.

He soon finds himself in the remote Outback, surrounded by Aboriginals, colonials, ex-convicts, ex-soldiers, and very few women. Determined to prove to his parents and more importantly, himself, that he can succeed in this vast and unfamiliar wilderness, Edward works hard at his new life amidst various livestock, bushrangers, shifty stock agents, and frontier battles.

By reimagining the tale of a fascinating yet little-known figure in history, this “roguishly tender coming-of-age story” (Booklist) offers penetrating insights into Colonialism and the fate of Australia’s indigenous people, and a wonderfully intimate portrait of Charles Dickens, as seen through the eyes of his son.

Thomas Keneally began his writing career in 1964 and has published thirty-three novels since, most recently Crimes of the Father, Napoleon’s Last Island, Shame and the Captives, and the New York Times bestselling The Daughters of Mars. He is also the author of Schindler’s List, which won the Booker Prize in 1982, The Chant of Jimmie Blacksmith, Gossip from the Forest, and Confederates, all of which were shortlisted for the Booker Prize. He has also written several works of nonfiction, including his boyhood memoir Homebush Boy, The Commonwealth of Thieves, and Searching for Schindler. He is married with two daughters and lives in Sydney, Australia.

“[An] absorbing novel…Plorn himself is a joy” —The Times

“Keneally has brought off a notable double: a delightful and continuously interesting portrayal of mid-19th century life in the rolling sheep pastures of New South Wales and an acute and persuasive examination of the mystery that Charles Dickens still presents, and of the enduring fascination he exerts over us today.” —Scotsman

“The Dickens Boy…is energetic, even exuberant. It is in love with the abundance of life it negotiates.” —The Sydney Morning Herald

“An ingenious, hilarious novel…Keneally does what he does so well: he plucks people from the pages of history and gives them emotional lives” —The Australian

“Keneally is a master at weaving historical figures and events into compelling works of fiction and so he does with his new book.” —Brisbane News


"[A] roguishly tender coming-of-age story...Keneally liberally and seamlessly integrates Dickensian allusions, references, and quotes as he weaves his tale and positively delights in spinning the local vernacular into his own Shakespearean yarns. Keneally brings authority and insight to his depictions of his homeland and its people, striking a perfect balance of the historical and poetic while also addressing race issues obliquely yet thoughtfully. The “guvnor” would approve." —Booklist