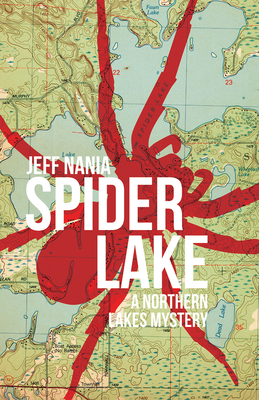 A missing federal agent, suitcases full of cash, a secluded cabin in the woods. Spider Lake is no longer the peaceful retreat John Cabrelli needs to recover from his gunshot wounds and start a new life. Knowing Cabrelli is a former law enforcement officer, the new chief of police recruits him to help untangle a string of strange events in the little town of Musky Falls. Cabrelli and a colorful team of local residents land in the center of a fast-paced action thriller with a surprise ending that’s sure to make your head spin.

Jeff Nania was born and raised in Wisconsin. His family settled in Madison’s storied Greenbush neighborhood. His father often loaded Jeff, his brothers, and a couple of dogs into an old jeep station wagon and set out for outdoor adventures. These experiences were foundational for developing a sense of community, a passion for outdoor traditions, and a love of our natural resources. Jeff’s first career was in law enforcement where he found great satisfaction in serving the community. He was a decorated officer who served in many roles, including as a member of the canine unit patrolling with his dog, Rosi. Things changed and circumstances dictated he take a new direction. The lifelong outdoorsman found a path to serve a different type of community. Over half of Wisconsin’s wetlands had been lost, and more were disappearing each year. Jeff began working with willing landowners to develop successful strategies to restore some of these wetlands. This journey led to creating a field team of strong conservation partners who restored thousands of acres of wetlands and uplands in Wisconsin. During that time, Jeff realized that the greatest challenge to our environment was the loss of connection between our kids and the outdoors. He donated his energy to restore that connection through Outdoor Adventure Days, an interactive experience giving school children a wet and muddy day in the field. Building on this foundation, Jeff co-founded one of the first environmentally focused charter schools with teacher Victoria Rydberg, and together, they brought the “hands on, feet wet” philosophy to teachers and students across the state. A pioneer in the ecosystem-based approach to restoration and a tireless advocate for conservation education, Jeff has been widely recognized for his work. Outdoor Life Magazine named him as one of the nation’s 25 most influential conservationists and he received the National Wetlands Award. The Wisconsin Senate commended Jeff with a Joint Resolution for his work with wetlands, education, and as a non-partisan advisor on natural resources. Jeff is semi-retired and writes for Wisconsin Outdoor News and other publications. Whether he’s cutting wood, sitting in a wetland, fishing muskies, or snorkeling Spider Lake for treasure, Jeff spends as much time as possible outdoors.