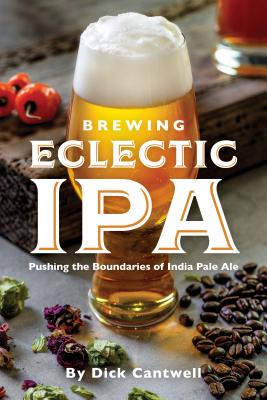 As a diverse but distinctive style, IPA bestrides the craft beer world like a colossus. As author Dick Cantwell says, "We are living in the heyday of IPA." While hops remain front and center in the myriad examples of IPA available to beer drinkers today, the style is also now subject to vast experimentation and "dressing-up," producing fruity, herbal, black, Belgian-y, and juicy versions of this perennial favorite. Brewers are pushing the boundaries of IPA by using flavors from cocoa, coffee, tea, fruits, vegetables, spices, herbs, chilis, and wood. Before describing how this multitude of ingredients can best be applied to crafting unique, eclectic, and tasty IPAs, Cantwell gives a potted history of IPA, acknowledging some of the fanciful notions the story often includes. When he arrives at craft brewing today, Cantwell opens up whole new vistas where experimentation can happen, involving spices and herbs of all kinds, fruits from every corner of the globe, vegetables familiar and not-so-familiar, coffee and chocolate, teas and botanicals. Along the way, he describes his thoughts behind his approach and how to treat these ingredients with free license while still being conscious that the aim is to produce something delicious that people will want to drink again. Brewing Eclectic IPA will inspire professional and homebrewers alike to explore the creative ways in which these ingredients can be used in brewing highly hopped beers. Try your own version using any of the 25 recipes for contemporary IPAs that the book contains, designed by some of America's top brewers.

One of the industry's most well-respected and experienced craft brewers, Cantwell co-founded Elysian Brewing Company in 1996, where he served as head brewer until its sale to Anheuser-Busch in 2015. During his tenure, Elysian was named Large Brewpub of the Year three times at the Great American Beer Festival(R) (1999, 2003 and 2004), and in 2004, he received the BA's Russell Schehrer Award for Innovation in Brewing. Additionally, he has written for various beer magazines, including The New Brewer, Beer Advocate and American Brewer. His book publishing credits include Barley Wine (with Fal Allen), The Brewers Association's Guide to Starting Your Own Brewery, Second Edition, and Wood & Beer with New Belgium's Peter Bouckaert. He divides his time between Seattle and San Francisco.