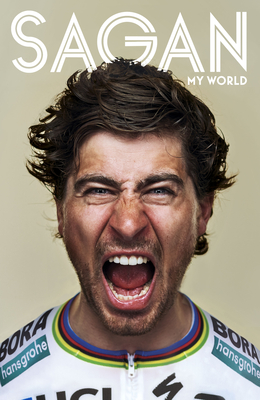 In My World, Peter Sagan, one of cycling's greatest riders of all time, gives bike racing fans a glimpse behind the scenes of his cycling life, revealing the full extent of his dedication to competition and determination to win.With four Tour de France points jersey victories, three road race world championships, the 2018 Paris-Roubaix, and multiple spring classics among Sagan's palmares, the world of cycling agrees that this intense yet fun-loving rider is among the most dominant and fun-to-watch riders of his generation.Inside My World, Sagan discusses his relationship with fellow riders, his heroes, and how he copes with the expectation of success. He also shares technical details about his preparation, dissects the art of the sprint, and analyzes the tactics that play out during a fiercely competitive stage or race.

Peter Sagan is a Slovak professional cyclist, 3-time cycling road race world champion, 6-time Tour de France points winner, and winner of the 2018 Paris-Roubaix. In 2017, he became the first man in the history of the sport to win three consecutive road race World Championships, ensuring his entry into the record books as one of the greatest riders of all time. In addition to the world championships, he has won five Tour de France green jerseys, has won the Monument race at the Tour of Flanders, and has had further achievements in mountain biking. Thanks to his flair in the saddle and unmatched charisma with the media, Sagan has quickly become the most prominent ambassador for the sport.