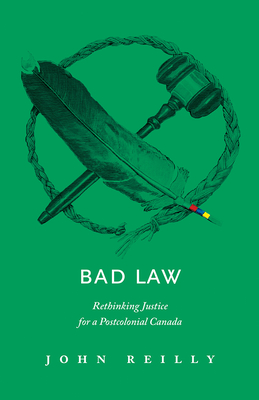 From the bestselling author of Bad Medicine and its sequel Bad Judgment comes a wide-ranging, magisterial summation of the years-long intellectual and personal journey of an Alberta jurist who went against the grain and actually learned about Canada's Indigenous people in order to become a public servant.

"Probably my greatest claim to fame is that I changed my mind," writes John Reilly in this broadly cogent interrogation of the Canadian justice system. Building on his previous two books, Reilly acquaints the reader with the ironies and futilities of an approach to justice so adversarial and dysfunctional that it often increases crime rather than reducing it. He examines the radically different indigenous approach to wrongdoing, which is restorative rather than retributive, founded on the premise that people are basically good and wrongdoing is the aberration, not that humans are essentially evil and have to be deterred by horrendous punishments. He marshalls extensive evidence, including an historic 19th-century US case that was ultimately decided according to Sioux tribal custom, not US federal law.

And then he just comes out and says it: "My proposition is that the dominant Canadian society should scrap its criminal justice system and replace it with the gentler, and more effective, process used by the Indigenous people."

Punishment; deterrence; due process; the socially corrosive influence of anger, hatred and revenge; sexual offences; the expensive futility of "wars on drugs"; the radical power of forgiveness--all of that and more gets examined here. And not in a bloodlessly abstract, theoretical way, but with all the colour and anecdotal savour that could only come from an author who spent years watching it all so intently from the bench.

John Reilly is the bestselling author of Bad Medicine: A Judge's Struggle for Justice in a First Nations Community and Bad Judgment: The Myths of First Nations Equality and Judicial Independence in Canada, along with the recently released Bad Law: Rethinking Justice with an Indigenous Perspective. After 33 years in public service as a circuit court judge, Reilly retired, having become disillusioned with the Canadian criminal justice system and in particular its treatment of Indigenous people. Still publicly active and openly critical about the law, politics, and the legal system, he now seeks to challenge people to rethink the true meaning of justice, the need for drastic changes in the criminal justice system in Canada, and the need to change our attitudes towards Indigenous people. John lives in Calgary, Alberta.