Incidents at Sea: American Confrontation and Cooperation with Russia and China, 1945-2016 (Hardcover) 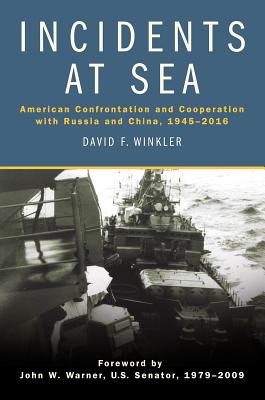 Free to patrol the skies and surface of the high seas under international law, U.S. and Soviet naval and air forces made daily direct contact during the Cold War. Often confrontational and occasionally violent, air-to-air contacts alone killed more than one hundred Soviet and American aviators during the Truman and Eisenhower years. Diplomacy to curtail the hostility produced mixed results. By the 1960s the Soviet navy had challenged U.S. naval dominance worldwide, and collisions and charges of harassment became common. In 1972 the two nations signed an Incidents at Sea Agreement (INCSEA) that established navy-to-navy channels to resolve issues stemming from these confrontations. This agreement, still in effect between the United States and Russia, is the focus of David Winkler's study. In Incidents at Sea, Winkler argues that Soviet and American naval officers, sharing bonds inherent to mariners, could put ideology aside and speak frankly. Working together, they limited incidents that could have had unfortunate consequences. The process they established served as a model for similar accords between other maritime nations. With the emergence of China as a maritime power, elements of the U.S.-Russia accord were adopted to assure peaceful interactions between American and Chinese naval forces. Drawing on State Department files, declassified Navy policy papers, discussions with former top officials, and interviews with individuals who were involved in incidents, Winkler details the U.S.-Soviet naval relationship through the end of the Cold War and beyond. In this volume, an updated edition of his classic Cold War at Sea, Winkler brings the story up to the present, detailing occasional U.S.-Russia naval interactions, including the April 2016 Russian aircraft buzzings of the USS Donald Cook in the Baltic. He also details China's efforts to militarize the South China Sea and claim sovereignty over waters within its exclusive economic zone, and the U.S. Navy's continuing efforts to counter these challenges to freedom of navigation. Overall, thanks to agreements like INCSEA, incidents at sea have become a rarity. While those who negotiated these rules deserve recognition, the sailors and aviators who operate on the world's oceans deserve the ultimate acclaim for their professionalism in assuring that the agreed-upon protocols were implemented.