The Lost Boy: A Novel (Hardcover) 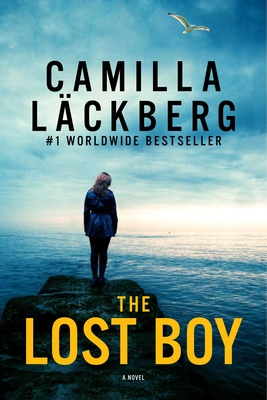 Detective Patrik Hedstrom is no stranger to tragedy. A murder case concerning Fjällbacka’s dead financial director, Mats Sverin, is a grim but useful distraction from his recent family misfortunes.

It seems Sverin was a man who everybody liked yet nobody really knew — a man with something to hide . . .

His high school sweetheart, Nathalie, has just returned to Fjallbacka with her five-year-old son — perhaps can she shed some light on who Sverin really was?
However, Nathalie has her own secret. If it’s discovered, she will lose her only child. As the investigation stalls, the police have many questions. But there is only one that matters: Is there anything a mother would not do to protect her child?

Camilla Lackberg worked as an economist in Stockholm until a course in creative writing triggered a drastic career change. Her novels have all been #1 bestsellers in Sweden, and she is the most profitable native author in Swedish history. She was recently the #1 bestselling female author in Europe, and her novels have been sold in thirty-five countries. Her previous novels include The Stonecutter and The Stranger, which is available from Pegasus Books. Camilla lives in a suburb of Stockholm with her family.

"Camilla Läckberg proves why she’s called Sweden’s ‘queen of crime’ in her superb seventh novel. The Lost Boy combines a gripping police procedural with a ghost story while poignantly delving into the devastating effects of grief, especially among mothers. Delving into the intricacies of police work, Läckberg also turns The Lost Boy into a psychological thriller that digs deep into each character’s psyche. While the shadowy ghosts permeate the story, Läckberg keeps this supernatural aspect akin to those in the gothic masterpiece The Turn of the Screw."
— The Associated Press

"The Nordic crime-fiction trend sparked by The Girl With the Dragon Tattoo and Henning Mankell’s novels shows no sign of abating. One of the best writers to emerge is Lackberg. The books shine."
— Entertainment Weekly

"Stunning. With her trademark impeccable psychological insight, Läckberg intertwines subplots that personalize the devastation wreaked by Sweden’s drug trade, its biker culture, and its far too prevalent domestic abuse. Ghostly shadows from this searing entry will surely linger long in the reader’s imagination."
— Publishers Weekly (starred)

"Swedish writer Camilla Läckberg’s new novel, The Lost Boy, confirms her place as reigning monarch of the crime mystery genre called Nordic Noir. Läckberg’s storytelling talents rank with those of the late Henning Mankell, author of the Wallander mysteries, and the late Stieg Larsson, who wrote The Girl With the Dragon Tattoo."
— Minneapolis Star Tribune

"Part of the popularity of Läckberg’s books is due to her penchant for making the reader work a little for answers, even as the narrative makes the pages fly by. This is especially true in the latest installment. Thanks to an ace translation by Tiina Nunnally, American readers have the opportunity to sink their teeth into one of Läckberg’s most complex yet, at the same time, simplest novels to date."
— Bookreporter

"Läckberg has a knack for creating very believable characters and for mixing the funny moments in everyday life with dark and twisty crimes that will keep the reader hooked. Fans of other Scandinavian investigators, like Henning Mankell's Wallander and Stieg Larsson's Blomkvist and Salander, are sure to love Patrik and Erica."
— Shelf Awareness

"Scandinavian mystery writers have practically dominated the field [of noir writing] over the last 20 years, and Camilla Läckberg is one of the best. Grief is real. Life is hard. And Camilla Läckberg’s The Lost Boy is sometimes a rough read. But it’s worth it."
— Bookgasm

"In the manner of Louise Penny’s Inspector Gamache books, Läckberg’s tale weaves a particular event (in this case, the murder of a recently returned native son) with the evolving narrative of a community. To further beat the Penny comparison into the ground, Läckberg’s prose is similarly well crafted (and sensitively translated by Tiina Nunnally)."
— Bookpage

"The Lost Boy is a complex and brilliant novel. Another masterpiece by Swedish author Camilla Lackberg."
— New York Journal of Books