Powder: The Greatest Ski Runs on the Planet (Hardcover) 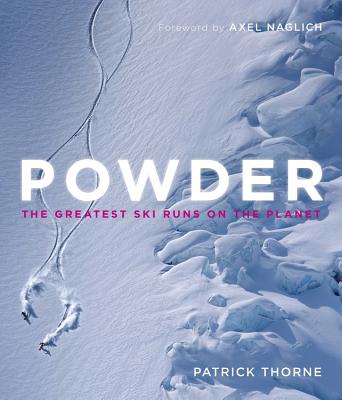 By Patrick Thorne
Email or call for price
Out of Print

The most impressive, thrilling and scenic ski runs in the world, Powder is the definitive guide to the top ski and snowboard locations.

This comprehensive and visually stunning feast of snow-bound derring-do showcases the very best and most feared descents in the world. Along with classics like Chamonix, Whistler, and Jackson Hole, this book also covers more off-the-beaten-path and exotic locations like the Himalayas, the Atlas Mountains, and the Olympic destination of Socchi in Russia; places that not only stand out for the fantastic skiing, but for the extraordinary scenery found in such uniquely beautiful destinations.

With stunning photography and all the information you could need to plan the perfect trip, Powder is the ultimate bucket list for any snow sports enthusiast, challenging beginners and experts alike to take on the most breathtaking runs the world has to offer.

Patrick "Snowhunter" Thorne has been a writer all of his life and a ski travel writer throughout his adulthood, since 1984. With a career that has mirrored the rise of information technology, after publishing his first ski book in 1985, Patrick went on to build a database of all the ski areas in the world, eventually hunting down more than 6,000 areas in 80 countries--a database that sits behind many of the world's ski information sites, books and brochures. Over the years Patrick has gained a formidable worldwide client list ranging from Microsoft, Berlitz, Rough Guides, AOL, the BBC and Teletext in the 1990s through Virgin, Skiinfo, Frommers and InTheSnow more recently. As well as writing for publications worldwide Patrick himself has been featured in many and his work has been sold to top resorts around the planet too including Aspen, Intrawest, Madonna di Campiglio, Sun Valley, Verbier and Zermatt.