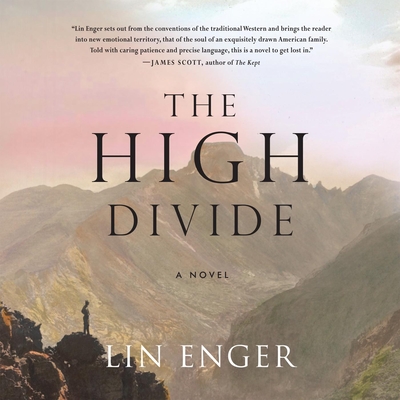 “Early one morning in 1886, Ulysses Pope leaves his family to embark on a journey that he hopes will save his immortal life. The wife and two sons he leaves behind are devastated by his unannounced departure, and so begins a life-altering adventure for all concerned that addresses questions far beyond the usual trope in a classic Western novel. The High Divide is a book about a man living his life with integrity and how he puts his family and his life on the line to make amends on a grand scale. Enger writes with enormous literary skill in this remarkable work.”
— Pam Cady, University Book Store, Seattle, WA

In 1886, Gretta Pope wakes one morning to discover that her husband is gone. Ulysses Pope has left his family behind on the far edge of Minnesota’s western prairie, with only the briefest of notes and no explanation for why he left or where he’s headed. It doesn’t take long for Gretta’s young sons, Eli and Danny, to set off after him, following the scant clues they can find, jumping trains to get where they need to go, and ending up in the rugged badlands of Montana.

Short on money and beleaguered by a treacherous landlord, Gretta has no choice but to seek out her sons and her husband as well, leading her to the doorstep of a woman who seems intent on making Ulysses her own. While out in the Western wilderness, the boys find that the closer they come to Ulysses’s trail, the greater the perils that confront them—until each is faced with a choice about whom they will defend, and who they will become. Enger’s breathtaking portrait of the vast plains land- scape is matched by the rich expanse of his characters’ emotional terrain, as pivotal historical events—the bloody turmoil of expansionism, the near total demise of the bison herds, and the subjugation of the Plains Indians—blend seamlessly with the intimate story of a family’s sacrifice and devotion.

LIN ENGER is an Iowa Workshop graduate, the author of the novel Undiscovered Country, and the recipient of a James Michener Award and a Minnesota State Arts Board Fellowship. His short stories have appeared in Glimmer Train, Ascent, Great River Review, Wolf Head Quarterly, and other journals. He teaches at Minnesota State University Moorhead. His website is www.lin-enger.com.