The High Divide: A Novel (Paperback) 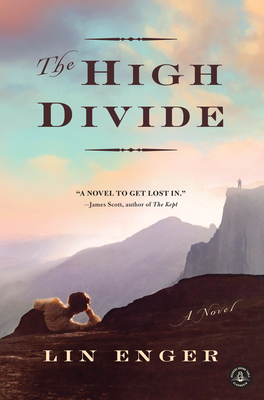 “Early one morning in 1886, Ulysses Pope leaves his family to embark on a journey that he hopes will save his immortal life. The wife and two sons he leaves behind are devastated by his unannounced departure, and so begins a life-altering adventure for all concerned that addresses questions far beyond the usual trope in a classic Western novel. The High Divide is a book about a man living his life with integrity and how he puts his family and his life on the line to make amends on a grand scale. Enger writes with enormous literary skill in this remarkable work.”
— Pam Cady, University Book Store, Seattle, WA

“The High Divide is a vivid reminder of why we read, and why we want to."*

In 1886, Gretta Pope wakes up one morning to discover that her husband is gone. Ulysses Pope has left his family behind on the far edge of Minnesota’s western prairie, with only a brief note and no explanation for why he left or where he’s heading. It doesn’t take long for Gretta’s young sons, Eli and Danny, to set off after him, leaving Gretta no choice but to search out the boys and their father and bring them all home.

Enger’s breathtaking portrait of the vast plains landscape is matched by the rich expanse of the story’s emotional terrain, in which pivotal historical events coincide with the intimate story of a family’s sacrifice and devotion.

“A deeply moving, gripping novel about one man’s quest for redemption and his family’s determination to learn the truth . . . Layered with meaning, this remarkable novel deserves to be read more than once. The High Divide proves Enger’s chops as a masterful storyteller.” —Ann Weisgarber, author of The Promise

“Blends adventure, two boys coming of age and an exploration of trust in marriage . . . The story captures the splendor of the 19th-century West.” —St. Paul Pioneer Press

“A compelling story of a house divided, of a man’s haunting pursuit of forgiveness, and a family’s search for the husband they thought they knew—but never really did.” —*True West Magazine

“A captivating story . . . Once you start turning the pages,  there’s no setting the book down.” —The Denver Post

LIN ENGER is an Iowa Workshop graduate, the author of the novel Undiscovered Country, and the recipient of a James Michener Award and a Minnesota State Arts Board Fellowship. His short stories have appeared in Glimmer Train, Ascent, Great River Review, Wolf Head Quarterly, and other journals. He teaches at Minnesota State University Moorhead. His website is www.lin-enger.com.

“[A] compelling story of a house divided, of a man’s haunting pursuit of forgiveness, and a family’s search for the husband they thought they knew--but never really did . . . The High Divide is a vivid reminder of why we read, and why we want to.” —True West Magazine

“A captivating story . . . The adventure unfolds in prose at turns rollicking and sanguine; Enger is a master of pacing, and once you start turning the pages, there’s no setting the book down.” —Denver Post

“Patiently told and moving . . . [Enger’s] writing style is precise, restrained, and enlivened by his protagonists . . . Although some would call The High Divide a historical novel, it’s really a fine literary work that steps back in time a bit.  It offers an engaging and affecting story with very real characters.” —Minneapolis Star Tribune

“Masterfully told . . . Enger’s writing is stark and coldly beautiful, befitting his subject matter and allowing the story itself to take pride of place. Enger has captured something uniquely American here, in the loneliness and simultaneous grandeur of the scenery, the restlessness in the hearts of his characters, and the need for redemption that is the key to Ulysses’s mysterious quest.” —The Daily Beast

“Blends adventure, two boys coming of age, and an exploration of trust in marriage. Set in 1886, the story captures the splendor of the 19th-century West.” —St. Paul Pioneer Press

“Based on two historical events, the Hornaday expedition of 1886 and the Washita incident, The High Divide is quietly captivating, growing more exciting as the pages turn.” —Washington Missourian

“[A] masterfully told Western reinvention of Homer’s Odyssey . . . Set against a backdrop of beauty and danger, this is the moving story of a man coming to terms with his past. In its narrative simplicity and emotional directness, it is reminiscent of John Ford’s classic The Searchers.” —Publishers Weekly, starred review

“Moving through the High Divide--'the rough country between the Yellowstone and Missouri rivers'--even as its characters move through important divides, or turning points, of their own, Enger's novel is told in beautifully exact, liquid language that wastes no time, just as one cannot afford to waste time when making a journey such as the Pope family's. Highly recommended.” —Library Journal, starred review