Alaska Native Games and How to Play Them (Snowy Owl) (Paperback) 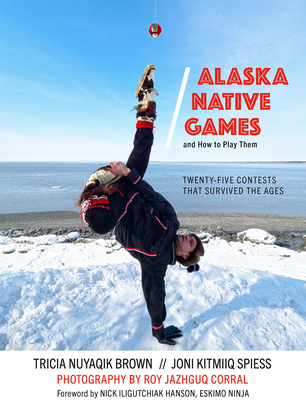 The athletes of the Alaska Native games aren’t just returning to their roots. They’ve never left them. In this beautifully illustrated book, readers learn the history of twenty-five Native games that have been handed down through generations, how each one relates to the subsistence lifestyle, and how you can try them yourself, regardless of where you live.

As Tricia Nuyaqik Brown shows, even though today’s competitions are a big media event in Alaska, the games themselves are really no different from those of long ago. Ancestral communities once pitted their strongest, their most agile, their fastest men and women against those from neighboring villages or tribal groups. Those games never died, but rather than gathering in a sod meeting place, competitions are now held in gyms and arenas. Each game today can be linked to some aspect of surviving in a harsh environment, of drawing sustenance from the land and sea. From the Seal Hop to the Bench Reach to the Four-Man Carry, these ancient games still require athletes to be in top physical condition and possess sharp mental focus. They hold dear the traditional Native values of honoring the elders, responsibility to tribe, sportsmanship, humor, patience, and hunter success. This book offers an engaging introduction to these games and their history, inviting people to jump in and try them for themselves!

Tricia Nuyaqik Brown has been writing and editing publications about Alaska since the early 1980s. In 1998, she partnered with Roy Corral to write and photograph the now classic Children of the Midnight Sun, which received national critical acclaim for its profiles of Alaska Native children. Twenty years later, Brown and Corral flew throughout Alaska to produce Children of the First People, featuring a new cast of ten Alaska Native children, one from each tribal group. Tricia has written nearly two dozen nonfiction books for adults; another eight picture books for children may be found in schools, libraries, and personal collections. She works independently as an author, editor, and book developer for various publishers.


Joni Kitmiiq Spiess is an Iñupiaq woman born in Nome, Alaska, who has been a traditional games competitor, coach, and encourager to many. After studies in Anchorage, Joni returned to Nome and taught physical education to elementary school children from 2005–2012. She also began demonstrating the Native games to her students and soon was coaching a team. Now in Anchorage, she’s involved in health education for young children through the Southcentral Foundation. Joni is married and the mother of two young boys.


Roy Corral is a veteran photographer whose work has appeared in books, magazines, and websites nationally, among them Alaska, National Geographic, and Forbes. He has photo-illustrated children’s books since his first in 1995—My Denali and A Child’s Glacier Bay— written from his daughter’s perspective. Roy’s work to capture authentic Native life for readers included books for adults, such as Alaska Native Ways and Chugach: Reflections of the People, Land and Sea; and collaborating with Tricia Brown, he illustrated two books for middle-graders, titled Children of the Midnight Sun and Children of the First People.