Man Called Intrepid: The Incredible WWII Narrative of the Hero Whose Spy Network and Secret Diplomacy Changed the Course of History (Paperback) 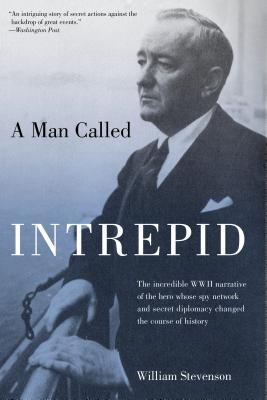 A classic about real-life WWII espionage, as conducted by its modern master * A Man Called Intrepid is the classic true story of Sir William Stephenson (codenamed Intrepid) and the spy network he founded that would ultimately stall the Nazi war machine and help win World War II. Ian Fleming, bestselling author of the James Bond novels, once remarked, James Bond is a highly romanticized version of a true spy. The real thing is William Stephenson. Illustrated with thirty-two pages of black-and-white photographs, this book describes the infamous Camp X spy training center in Ontario, Canada; the breaking of the Ultra Code used by Enigma; and countless tales of assassinations, clandestine activities, guerrilla armies, resistance support, and suicide missions. This modern classic, which reads like fiction, was a national bestseller when first published in 1976.

William Stevenson (no relation to the subject of this book) was trained in aerial espionage as a British naval fighter pilot during World War II. A distinguished journalist and war correspondent, he is the author of sixteen books, including A Man Called Intrepid, Intrepid's Last Case (Lyons), and Ninety Minutes at Entebbe. He lives in Toronto, Canada.

“James Bond is a highly romanticized version of a true spy. The real thing is William Stephenson.”
—Ian Fleming, bestselling author of the James Bond novels

“A splendid book. Rich in information. . . . profound in its implications.”
—San Francisco Chronicle

“An intriguing story of secret actions against the backdrop of great events.”
—Washington Post

“As long as Americans value courage and freedom there will be a special place in our hearts, our minds, and our history books for the ‘Man Called Intrepid.’”
—Ronald Reagan