As a Man Thinketh (Hardcover) 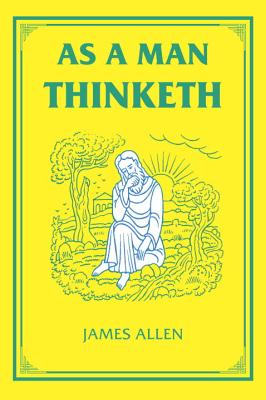 The mind guides our footsteps as we progress along the pathway of life.

Purity of mind leads inevitably to purity of life, to the precious love and understanding that should control our everyday acts and attitudes towards friends and foes.

But where must one look for guidance? How does one achieve purity of mind that alone brings happiness and confidence?

The author offers his clear answers in this book As A Man Thinketh. His words have helped millions for more than a century--and they continue to point the true way to a better life for a troubled humanity.

"Out of a clean heart comes a clean life and a clean body," James Allen writes. "out of a defiled mind proceeds a defiled life and a corrupt body."

Too many mortals strive to improve only their wordly position--and too few seek spiritual betterment. Such is the problem James Allen faced in his own time. The ideas he found in his inner-most heart after great searching guided him as they will guide you.

James Allen was born in Leicester, England, in 1864. He took his first job at age 15 to support his family, after his father was murdered while looking for work in America. Allen was employed as a factory knitter and a private secretary until the early twentieth century, when he became increasingly known for his motivational writing. His 1903 work As a Man Thinketh earned him worldwide fame as a prophet of inspirational thinking and influenced a who's-who of self-help writers, including Napoleon Hill, Dale Carnegie, and Norman Vincent Peale. Allen died at age 47 in 1912.