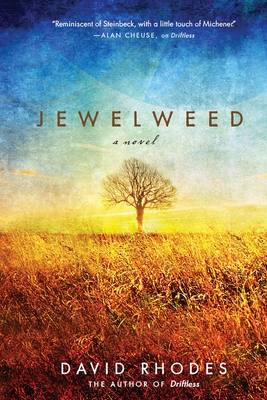 “Can people start over? Jewelweed proves many can in spite of lost loves, war and imprisonment. Blake Bookchester has just been paroled from a system that promotes postmodern slavery and a war on minorities and the poor. He returns to his hometown, Words, Wisconsin where he will ty to reconcile with his past and forge a new future. Other people who form this small community will grab your heart and not let go. For one, August, a teen, but wise beyond his years, spouts profound remarks such as: 'our planet is turning into a 'new region of hell' with its senseless wars, torture practiced openly, needless starvation, homelessness, higher and higher suicide rates, pollution, species extinction, and the greedy arrogance of the thousand hired thieves in government.' You will love Florence, who speaks 'at the speed of ice melting at the North Pole'; Wally who writes down items he will miss when he dies; Danielle, aka Dart, abused as a young girl doing her best to raise her son Ivan; Winnie, the town's minister and most of all, a wild boy. Is he real or an hallucination? Jewelweed, a plant that looks like little pieces of jewelry strung together on heavy green thread, is an apt description of the people of Words, all tied together and realizing the importance of community to their individual lives. You won't want to miss a word of David Rhodes' magical, soul-felt novel. Highly recommended and may he continue his deeply moving story-telling.”
— Karen Briggs, Great Northern Books and Hobbies, Oscoda, MI

From a masterful storyteller, comes a Midwestern epic that illuminates the majestic in the commonplace. When David Rhodes burst onto the American literary scene in the 1970s, he was hailed as "a brilliant visionary" (John Gardner), and compared to Sherwood Anderson and Marilynne Robinson. In Driftless, his "most accomplished work yet" (Joseph Kanon), Rhodes brought Words, WI, to life in a way that resonated with readers across the country. Now with Jewelweed, this beloved author returns to the same out-of-the-way hamlet and introduces a cast of characters who all find themselves charged with overcoming the burdens left by the past, sometimes with the help of peach preserves or pie. After serving time for a dubious conviction, Blake Bookchester is paroled and returns home. The story of Blake's hometown is one of challenge, change, and redemption, of outsiders and of limitations, and simultaneously one of supernatural happenings and of great love. Each of Rhodes's characters--flawed, deeply human, and ultimately universal--approach the future with a combination of hope and trepidation, increasingly mindful of the importance of community to their individual lives. Rich with a sense of empathy and wonder, Jewelweed offers a vision in which the ordinary becomes mythical.

David Rhodes grew up near Des Moines where he attended a Quaker School. He dropped out of Beloit College in the 1960s and eventually graduated from Marlboro College in Vermont. After receiving an M.F.A. in writing from the University of Iowa Writers' Workshop in 1971, he published three novels in rapid succession to acclaim: The Last Fair Deal Going Down (Atlantic/Little, Brown, 1972), The Easter House (Harper & Row, 1974), and Rock Island Line (Harper & Row, 1975). A motorcycle accident in 1976 left him paralyzed from the chest down. He continued writing, but did not publish again until 2008 when his novel, Driftless, was published. It received a Milkweed National Fiction prize, was read on Wisconsin Public Radio, and was chosen as an All Iowa Reads selection. Milkweed has reissued all of his previous books. He currently lives with his wife, Edna, in Wisconsin.

"[A] rhapsodic, many-faceted novel of profound dilemmas, survival, and gratitude.... Rhodes portrays his smart, searching, kind characters with extraordinary dimension as each wrestles with what it means to be good and do good." Booklist (STARRED REVIEW)

Jewelweed is a novel of forgiveness, a generous ode to the spirit’s indefatigable longing for love.” Minneapolis Star Tribune

"Brave and inspiring.... Rhodes also has important things to say about humble, hardworking Americans at odds with contemporary American culture, which he finds predatory, corporate, and soulless. An impressive and emotionally gratifying novel; highly recommended for fans of literary fiction." Library Journal

"Masterful storytelling.... The characters in Driftless and Jewelweed are rendered with such care and precision that this little known region of the Midwest becomes dazzlingly alive. At the same time, Rhodes' decision to publish again marks a welcome return of a master storyteller of real people who live in our small towns." Chicago Tribune Printers Row Journal

I liked Driftless, but his emotionally rich new novel, Jewelweed, a sequel of sorts, is even better. The novel emits frequent solar flares of surprise and wonder.” Cleveland Plain Dealer

"A master of nuance, Rhodes picks up on those 'inaudible rhythms' that drive human actions: fear, regret, friendship, yearning, and a desire for forgiveness." Milwaukee Journal Sentinel

[A] deeply moving meditation on the resonance of each individual life on a small Wisconsin town.” Wisconsin State Journal

Jewelweed is another book that all Iowa should read." Iowa Press-Citizen

A damn fine novelone of the best kindswhere ordinary people living ordinary lives are drawn by the deft and lyrical touch of the author in such an achingly rich way, one quietly marvels.” Sheryl Cotleur, Copperfield’s Books

Rhodes describes the natural world and his characters’ inner lives with equal passion, creating an ensemble as natural to its landscape as the trees. Jewelweed is a remarkable piece of storytelling, soul-felt and deeply moving.” Mark LaFramboise, Politics & Prose Bookstore

David Rhodes takes seemingly mundane events, and makes them magic. The everyday is made spectacular through his telling.” Jack Hannert, Brilliant Books

From philosophical prison inmates to childhood-haunted truckers, Rhodes’s mélange of characters feels so real, you’d swear you lived among them.” Emily Crowe, The Odyssey Bookshop

With Jewelweed, David Rhodes has once more produced a moving, deeply thoughtful novel, of poor people doing difficult things, often against their best interests. He is the same writer, maybe better, as the author of Driftless.” Paul Ingram, Prairie Lights Books