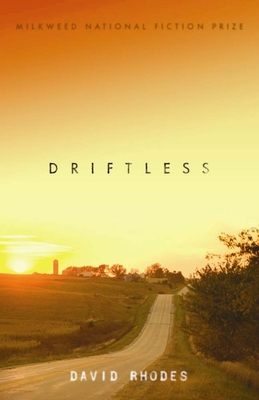 “After a 30-year hiatus following a motorcycle accident, David Rhodes has returned with a beautiful masterpiece. July Montgomery, the hero of Rhodes' Rock Island Line, first published in 1975, returns in a story filled with family secrets and more than one miracle. A great choice for your next book group!”
— Russell Villars, Bookworks, Albuquerque, NM

"A fast-moving story about small town life with characters that seem to have walked off the pages of Edgar Lee Masters's Spoon River Anthology."--The Wall Street Journal

The few hundred souls who inhabit Words, Wisconsin, are an extraordinary cast of characters. The middle-aged couple who zealously guards their farm from a scheming milk cooperative. The lifelong invalid, crippled by conflicting emotions about her sister. A cantankerous retiree, haunted by childhood memories after discovering a cougar in his haymow. The former drifter who forever alters the ties that bind a community. In his first novel in 30 years, David Rhodes offers a vivid and unforgettable look at life in small-town America.

" Rhodes's] finest work yet . . . Driftless is the best work of fiction to come out of the Midwest in many years."--Chicago Tribune

"Set in a rural Wisconsin town, the book presents a series of portraits that resemble Edgar Lee Masters's 'Spoon River Anthology' in their vividness and in the cumulative picture they create of village life."--The New Yorker

"Encompassing and incisive, comedic and profound, Driftless is a radiant novel of community and courage."--Booklist (starred review)

"A welcome antidote to overheated urban fiction . . . A quiet novel of depth and simplicity."--Kirkus Reviews

"It takes a while for all these stories to kick in, but once they do, Rhodes shows he still knows how to keep readers riveted. Add a blizzard, a marauding cougar and some rabble-rousing militiamen, and the result is a novel that is as affecting as it is pleasantly overstuffed."--Publishers Weekly

David Rhodes grew up near Des Moines and graduated from Marlboro College in Vermont. After receiving an MFA in Writing from the University of Iowa Writers' Workshop in 1971, he published three novels in rapid succession to acclaim: The Last Fair Deal Going Down, The Easter House, and Rock Island Line. Thirty years later, Milkweed reissued these and published his newest novel, Driftless . He currently lives with his wife Edna in Wisconsin, and his next book, Jewelweed will be published in May 2013.

Now, after what had to have been years of effort beyond the usual struggle of trying to make a good novel, we get [Rhodes’s] fourth, and, I have to shout it out, finest book yet. Driftless is the best work of fiction to come out of the Midwest in many years.”
Chicago Tribune

A profound and enduring paean to rural America. Radiant in its prose and deep in its quiet understanding of human needs.”
Milwaukee Journal Sentinel

Driftless is a fast-moving story about small town life with characters that seem to have walked off the pages of Edgar Lee Masters’s Spoon River Anthology.’”
Wall Street Journal

Comprised of a large number of short chapters, the novel opens with a prologue reminiscent of Steinbeck’s beautiful tribute to the Salinas Valley in the opening of East of Eden, with a little touch of Michener’s prologue to his novel Hawaii. The book moves at a stately pace as it offers deep philosophy and meditative asides about life in Words, Wisconsin, in the Driftless zone, which is to say, about life on earth.”
NPR, All Things Considered”

Few books have the power to transport the way Driftless does, and it’s Rhodes’ eye for detail that we have to thank for it.”
Time Out Chicago

A wry and generous book. Driftless shares a rhythm with the farming community it documents, and its reflective pace is well-suited to characters who are far more comfortable with hard work than words.”
Christian Science Monitor, Best Novels of 2008

A symphonic paean to the stillness that can be found in certain areas of the Midwest, The writing in Driftless is beautiful and surprising throughout, [and] it’s this poetic pointillism that originally made Rhodes famous.”
Minneapolis Star Tribune

[Driftless] presents a series of portraits that resemble Edgar Lee Masters’s 'Spoon River Anthology' in their vividness and in the cumulative picture they create of village life. Each of these stories glimmers.”
New Yorker

Rhodes consciously avoids drama to deliver a portrait of a real rural America as singular, beautiful and foreign as anywhere else.”
Philadelphia City Paper

Rhodes shows he still knows how to keep readers riveted. As affecting as it is pleasantly overstuffed.”
Publishers Weekly

Encompassing and incisive, comedic and profound, Driftless is a radiant novel of community and courage.”
Booklist, 2008 Editor’s Choice, starred review

Though Driftless is a deeply contemporary talewhat it has to say about the way corporations treat small farmers is, for example, quite pressingit also has the architectural complexity of the great 19th-century novels, but without the gimcrackery too often required to hold their stories together. It partakes as much of the moral universe of Magnolia as of Middlemarch. And it earns comparison to both.”
Books & Culture