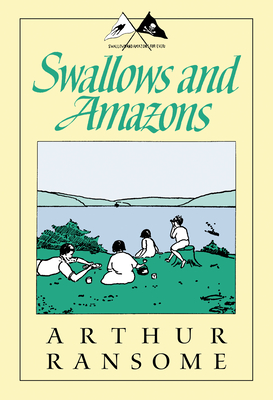 Friendship, resourcefulness, adventures Here's the classic tale of two families of children who band together against a common foe: an uncle who claims he's too busy for his nieces.

The Walker children (John, Susan, Titty and Roger) are on school holiday in the Lake District and are sailing a borrowed catboat named "Swallow," when they meet the Blackett children (Nancy and Peggy), who sail the boat, "Amazon." The children camp together on Wild Cat Island where a plot is hatched against the Blackett's Uncle Jim who is too busy writing his memoirs to be disturbed. Fireworks--literally--ensue along with a dangerous contest, a run-in with houseboat burglars, and the theft of Uncle Jim's manuscript. How all this is resolved makes for an exciting and very satisfying story. Uncle Jim ends up apologizing for missing his nieces' adventures all summer--thankfully, readers won't miss a thing. Arthur Ransome's Swallows and Amazons series has stood the test of time. More than just great stories, each one celebrates independence and initiative with a colorful, large cast of characters. Like the entire series that follows, this book is for children or grownups, anyone captivated by a world of adventure and imagination, exploring and setting sail.