The Most Fun Thing: Dispatches from a Skateboard Life (Hardcover) 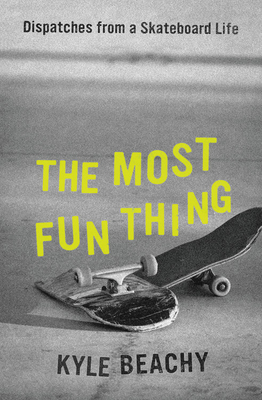 Perfect for fans of Barbarian Days, this memoir in essays follows one man's decade-long quest to uncover the hidden meaning of skateboarding, and explores how this search led unexpectedly to insights on marriage, love, loss, American invention, and growing old.

In January 2012, creative writing professor and novelist Kyle Beachy published one of his first essays on skate culture, an exploration of how Nike’s corporate strategy successfully gutted the once-mighty independent skate shoe market. Beachy has since established himself as skate culture's freshest, most illuminating, at times most controversial voice, writing candidly about the increasingly popular and fast-changing pastime he first picked up as a young boy and has continued to practice well into adulthood.

What is skateboarding? What does it mean to continue skateboarding after the age of forty, four decades after the kickflip was invented? How does one live authentically as an adult while staying true to a passion cemented in childhood? How does skateboarding shape one's understanding of contemporary American life? Of growing old and getting married?

Contemplating these questions and more, Beachy offers a deep exploration of a pastime—often overlooked, regularly maligned—whose seeming simplicity conceals universal truths. THE MOST FUN THING is both a rich account of a hobby and a collection of the lessons skateboarding has taught Beachy—and what it continues to teach him as he strugglesto find space for it as an adult, a professor, and a husband.

Kyle Beachy's first novel, The Slide (Dial Press, 2009), won The Chicago Reader's Best Book by a Chicago Author reader's choice award for the year. His short fiction has appeared in journals including Fanzine, Pank, Hobart, Juked, The Collagist, 5 Chapters, and others.His writing on skateboarding has appeared in The Point, The American Reader, The Chicagoan, Free Skateboard Magazine (UK & Europe), The Skateboard Mag (US), Jenkem, Deadspin, and The Classical. He teaches at Roosevelt University in Chicago and is a co-host on the skateboarding podcast Vent City with pro skater Ryan Lay and others.

“A candid, funny, and sometimes damning rumination on why we skateboard. The most thought-provoking writing on skateboarding I’ve ever read.”—Bing Liu, director of the Oscar-nominated documentary Minding the Gap

"The Most Fun Thing mines the value and ritual of fun… [Beachy’s] encyclopedic knowledge of skate ‘parts’ (a.k.a., films), bios, technicalities, even feuds, rolls into contemplations of Marilynne Robinson or Maggie Nelson… the book is grounded in memoir, vulnerable and direct, and often a stage for Kyle’s wit. The text can rollick… [Beachy] is now a premier chronicler of skateboarding."—Odie Lindsey, Southwest Review

“A rewarding read even—or especially—for those of us who don’t know anything about skateboarding…. with a keen eye for nuance and an unflinching critical lens that’s as apt to magnify moments of intense beauty as to call bullsh*t on this lifelong obsession... Endlessly relevant.”—Holly M. Wendt, The Rumpus

“Transform[s] the ordinary into the extraordinary. . . . Beachy has written a book about skateboarding unlike any before it.”—The Chicago Reader

"A serious literary work about skateboarding might provoke a certain skepticism. I wondered. But as soon as I started reading, I saw that, as with fly-fishing, surfing and other ‘pastimes,’ the surface action has its underlying personal metaphysics, and its access to past times. Kyle Beachy explores his obsession with sinuous and reflective prose and shows us just how it matters."—Sven Birkerts, author of The Art of Time in Memoir: Then, Again

"In THE MOST FUN THING, Kyle Beachy assembles critique, philosophy, anecdote, personal history and imagination, while being shrewd, witty, provocative and—above all—hugely engaging. This is my new favorite book on skateboarding."—Iain Borden, author of Skateboarding and the City: A Complete History

"Skateboarding is not only the most fun thing, it is also a way of seeing the world. In telling his own story, Beachy reflects on the history of this counter-culture-turned-mainstream-culture, and shows how it shapes the fundamental aspects of life, one's approach to work and relationships, even changes the feeling of being in one's own skin. No one has captured this better than Beachy. A great read."—Ocean Howell, author of Making the Mission: Planning and Ethnicity in San Francisco

“With the studied curiosity he’s established as a writer and critic, Beachy applies his honest, thoughtful prose to a wealth of seemingly disparate genres, binding them to create a work equal parts lively and insightful, intimate and universal, something his very own.”

"As readable as a skate mag and as complex as the best fiction, THE MOST FUN THING imbricates themes of meaning, community, and the soul, and will leave you marveling at skateboarding’s mystery and hopeful for its future. A book as much for the skateboarder as the artist and the writer, the thinker, the feeler."—Mark Suciu, professional skateboarder

"Reading The Most Fun Thing is the most fun thing that this reader has done in months. Kyle Beachy knows his skateboarding, but has even more to say about urban design, literary theory, marriage, the struggle for selfhood, the long-overdue exorcism of skate culture’s misogyny and bigotry, and the eternal knife fight between capitalism and community. With an omnivorous and probing intelligence, Beachy views our tattered world through the scratched fish-eye lens of a skateboarder, and finds jewels of truth hidden everywhere he looks."—Michael Christie, author of Greenwood and If I Fall, If I Die

“A meditation on a struggling marriage, told as homage to a joyfully blood-drenched sport. Thoughtful and deft, this is a book for anyone who has ever been vulnerable in mind or body.”—Kerry Howley, author of Thrown

“The year 2021 is the year of skateboarding. The ‘rebel’ pursuit was transformed into an Olympic sport. Thrasher magazine, skateboarding's bible, turned 40. So THE MOST FUN THING couldn't have come at a better time [to] ponder the meaning of skateboarding.” —NPR (Books We Love)