As A Man Thinketh (Paperback) 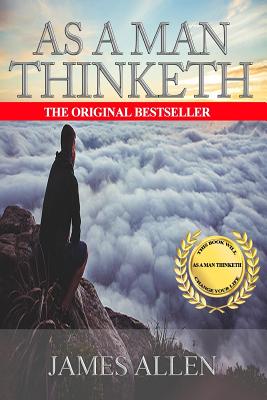 "As a Man Thinketh" is a literary essay by James Allen, published in 1903. It was described by Allen as "... dealing with the power of thought, and particularly with the use and application of thought to happy and beautiful issues. Allen has tried to make the book simple, so that all can easily grasp and follow its teaching, and put into practice the methods which it advises. It shows how, in his own thought-world, each man holds the key to every condition, good or bad, that enters into his life, and that, by working patiently and intelligently upon his thoughts, he may remake his life, and transform his circumstances. It was also described by Allen as "A book that will help you to help yourself", "A pocket companion for thoughtful people", and "A book on the power and right application of thought.

James Allen (1864-1912) was an Englishman who retired from the business world to pursue a lifestyle of writing and contemplation. His books are classics in the fields of inspiration and spirituality. Although best known for As a Man Thinketh, he authored several other books that deal with the power of thought including THE PATH OF PROSPERITY, EIGHT PILLARS OF PROSPERITY and James Allen's BOOK OF MEDITATION FOR EVERY DAY OF THE YEAR. Allen's books illustrate the use of the power of thought to increase personal capabilities. Allen's works continue to influence people around the world, including the New Thought movement.