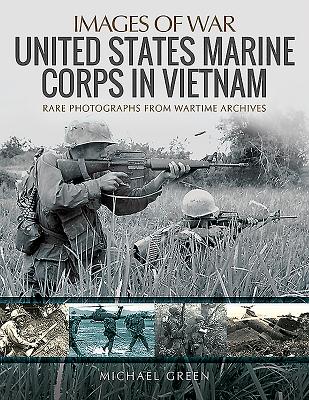 With the American-supported South Vietnamese government verging on collapse in early 1965, American President Lyndon Johnson decided to commit American conventional ground forces in the form of a United States Marine Corps (USMC) brigade of approximately 3,000 men on March 8, 1965. So began a massive and costly 10-year commitment. At its height in 1968, the USMC had 86,000 men in South Vietnam. Almost 500,000 Marines would eventually rotate in out of South Vietnam during their typical one-year tours of duty. In the end, the fighting during such well-known battles at Con Tien, Chu Lai, Hue, Khe Sanh and Dong Ha and thousands of now forgotten smaller-scale engagements would cost the USMC 13,070 killed in action and 88,630 wounded, more casualties than they suffered during the Second World War. In this book, well-known military historian Michael Green using hundreds of dramatic images tells the dramatic and gallant story of the Marines' contribution to an unwinnable war; the battles, their equipment, from rifles to helicopters and jets, and the strategy adopted by the Corps.