See You in the Cosmos (CD-Audio) 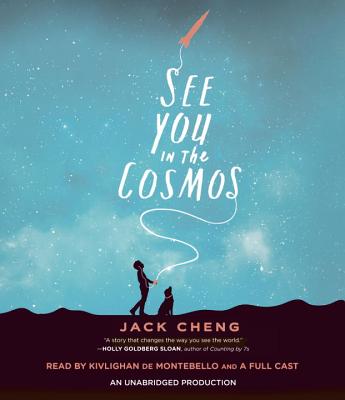 A space-obsessed boy and his dog, Carl Sagan, take a journey toward family, love, hope, and awe in this funny and moving novel for fans of Counting by 7s and Walk Two Moons.

11-year-old Alex Petroski loves space and rockets, his mom, his brother, and his dog Carl Sagan—named for his hero, the real-life astronomer. All he wants is to launch his golden iPod into space the way Carl Sagan (the man, not the dog) launched his Golden Record on the Voyager spacecraft in 1977. From Colorado to New Mexico, Las Vegas to L.A., Alex records a journey on his iPod to show other lifeforms what life on earth, his earth, is like. But his destination keeps changing. And the funny, lost, remarkable people he meets along the way can only partially prepare him for the secrets he’ll uncover—from the truth about his long-dead dad to the fact that, for a kid with a troubled mom and a mostly not-around brother, he has way more family than he ever knew.

For fans of Wonder and The Curious Incident of the Dog in the Night-Time, Jack Cheng’s debut is full of joy, optimism, determination, and unbelievable heart. To read the first page is to fall in love with Alex and his view of our big, beautiful, complicated world. To read the last is to know he and his story will stay with you a long, long time.

"The premise of the book--a story told through audio recordings--is a natural fit for an audiobook, and the narrators hit it out of the park."--Booklist, starred review

Jack Cheng was born in Shanghai, raised in Michigan, and lived in Brooklyn for a decade before settling in Detroit. See You in the Cosmos is his first novel for kids.

“I love this book—the characters, the story, but most of all, the voice that writer Jack Cheng has created. See You in the Cosmos is the best I've read in a long, long, long time. It’s a story that changes the way you see the world.” —Holly Goldberg Sloan, author of Counting by 7s

"The more [Alex] learns the truth about his family, the more he begins to wonder what a family really is. And if yours isn’t working well, this novel asks, how do you make a better one? . . . Alex’s voice stayed with me. If extraterrestrials ever did find his Golden iPod, they would think Earthlings were wonderful". —The New York Times Book Review

“I haven't read anything that has moved me this much since Wonder . . . The very best books are rare and powerful magic. See You in the Cosmos is one of these. I wanted to stay forever in this funny, wise, beautiful world.” —Jennifer Niven, author of All the Bright Places

“What makes this novel irresistible is Alex himself, a boy who's at once brilliant, clueless and alive with wonder.” —The Chicago Tribune

★ “A sweet, soulful debut novel with a brilliant, refreshing structure . . . Taking inspiration from the Voyager Golden Record released to space in 1977, Alex . . . records all the important moments of a journey that takes him from a family of two to a family of plenty. Riveting, inspiring, and sometimes hilarious.” —Kirkus, starred review

“[A] life-embracing, stream-of-consciousness tale of family lost and found.” —The Wall Street Journal

“This novel is a gift—a miracle. Alex fights with all of his magnificent, compassionate heart to remind us that we humans are first, last, and always creatures of hope. Jack Cheng is as brilliant as his debut, and more than that, he is wise. His novel made me want to be a better person.” —Paul Griffin, author When Friendship Followed Me Home

“Beauty . . . hilarity . . . poignancy . . . this unique novel’s journey [is] one totally worth taking.” —The Christian Science Monitor

“I was absolutely mesmerized by this book! . . . Mr. Cheng’s incredible storytelling reaffirmed my belief that creativity is still very much alive . . . . A wonderful read for middle grade-aged readers and beyond!” —BookRiot

“It is not always that we read a novel that so powerfully affirms our human capacity for grace and love and understanding; we need this book for the ways in which it gives us more to be human beings with. And it gives us Alex, whose face is turned to the stars.” —Gary D. Schmidt, author of Okay for Now

"Alex Petroski has a big mind, big dreams, and a big heart. His story is full of the real kind of magic—friends well-met, surprising journeys, and heartbreak and hope. This is a beautiful book." —Ally Condie, author of Matched

"Full of innocence and unwavering optimism, leaving the reader incapable of not rooting for Alex. . . .  This book skillfully explores the many emotions of an eleven-year-old boy and shows how young and old alike can bond over a love of science." —SLC

"Luminous and heartfelt, 11-year-old Alex Petroski’s story will grab your heart and expand it." —ImaginationSoup

“[See You in the Cosmos] reminded me a little of The Curious Incident of the Dog in the Night-Time by Mark Haddon . . . [Cheng’s is] a very touching book.” —GeekDad

"[A] poignant, memorable debut . . . entirely and deeply human." —The Guardian