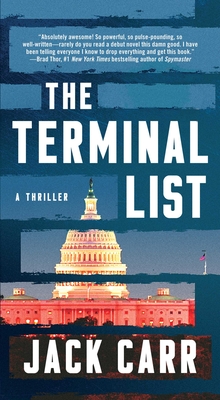 This is book number 1 in the Terminal List series.

“Take my word for it, James Reece is one rowdy motherf***er. Get ready!”—Chris Pratt, all around great guy and star of The Terminal List, coming to Amazon Prime

A Navy SEAL has nothing left to live for and everything to kill for after he discovers that the American government is behind the deaths of his team in this ripped-from-the-headlines political thriller that is “so powerful, so pulse-pounding, so well-written—rarely do you read a debut novel this damn good” (Brad Thor, #1 New York Times bestselling author).

On his last combat deployment, Lieutenant Commander James Reece’s entire team was killed in a catastrophic ambush. But when those dearest to him are murdered on the day of his homecoming, Reece discovers that this was not an act of war by a foreign enemy but a conspiracy that runs to the highest levels of government.

Now, with no family and free from the military’s command structure, Reece applies the lessons that he’s learned in over a decade of constant warfare toward avenging the deaths of his family and teammates. With breathless pacing and relentless suspense, Reece ruthlessly targets his enemies in the upper echelons of power without regard for the laws of combat or the rule of law.

“Told with a deft hand and a keen eye for detail, The Terminal List…is explosive and riveting” (Kevin Maurer, co-author of No East Day) and is perfect for fans of Vince Flynn, Brad Thor, Stephen Hunter, and Nelson DeMille.

Jack Carr is a #1 New York Times bestselling author and former Navy SEAL. He is the author of The Terminal List, True Believer, and Savage Son. He lives with his wife and three children in Park City, Utah. Visit him at OfficialJackCarr.com and follow along on Instagram, Twitter, and Facebook at @JackCarrUSA.

"Told with a deft hand and a keen eye for detail, THE TERMINAL LIST . . . is explosive and riveting."
— Kevin Maurer, co-author of the #1 Bestselling NO EASY DAY and AMERICAN RADICAL

"Like a bullet from Jack Carr’s custom built sniper rifle, the story arrives on target with devastating impact. Trust me, you won’t be able to put this one down!"
— Mark Owen, New York Times bestselling author of NO EASY DAY and NO HERO

"THE TERMINAL LIST is a thrill from start to finish! Let's all hope this is the first of many from Jack Carr."
— Chris Cox, NRA-ILA Executive Director

"Crackerjack plotting, vivid characters both in and out of uniform, and a relentless pace. to a worthy finish. It's a great start!"
— Stephen Hunter, #1 New York Times bestselling author of G-MAN

"If you are a fan of Vince Flynn or Brad Thor, make room on your nightstand - Jack Carr has arrived!"
— Eric Blehm, New York Times bestselling author of FEARLESS, LEGEND, and THE ONLY THING WORTH DYING FOR

"Hands down one of the best books I’ve ever read!"
— Brent Gleeson, author of TAKING POINT

"Absolutely riveting! Carr's experience and expertise shine on each and every page."
— Phillip Tomasso, Award Winning Author of Absolute Zero

"Not since Stephen Hunter have we seen an author who so accurately captures the essence of the gun–Jack Carr is a shooter."
— Clint Smith, Founder of Thunder Ranch Shooting School

“Impossible to put down. I read it cover to cover and can’t wait for the next one. Although fictional, it's very obvious that it's written by someone with 20 years of firsthand experience on the battlefield leading high pressure missions. Jack Carr knows what he’s writing about!!”
— Jimmy Spithill, Oracle Team USA America’s Cup Skipper and author of CHASING THE CUP: MY AMERICA'S CUP JOURNEY

"The author blends his unique perspective having ‘been there and done that’ into a writing style that pulls no punches. A must read and a no nonsense writer to watch."
— Larry Vickers, Master Sergeant (Retired) US Army SOF Combat Veteran

"Jack Carr is an amazing author! As a former Navy SEAL himself, Jack has created the main character, James Reece, to be a modern day American hero and dissolve a conspiracy that runs to the highest level of government!  It’s truly a thriller."
— Gebben Miles, World Champion Sporting Clays Shooter

"An intoxicating thriller that cautions against the seduction of absolute power and those who would do anything to achieve it, THE TERMINAL LIST is perfect for fans of Vince Flynn, Brad Thor, Stephen Hunter and Nelson DeMille."
— Bookreporter.com

"The Terminal List is nothing short of a runaway train on fire, heading down a steep hill with no brakes, and as the very eager reader, I did not want to get off. Worth 5 sniper-precision stars!"
— The Wit & Wonder Agency

"Jack Carr's The Terminal List is a page turning thriller you won't be able to put down. The detail-focused writing, personal characters and heart pounding plot line will keep you coming back for more. An absolute must-read!"
— Katie Pavlich, New York Times Bestselling Author

"Any fan of the novels by Brad Thor and the late Vince Flynn will realize that Jack Carr will soon be joining their ranks. THE TERMINAL LIST is sure to be the best debut thriller of 2018."
— The Washington Times

"There have been many inspiring books by SEALs about their life and career. With The Terminal List, readers get the inspiring story within an action-packed plot."
— Black Five

"Carr's novel is a strong cocktail. The Terminal List combines a shot of Vince Flynn's Term Limits with a dash of Stephen Hunter's Point of Impact, tosses in a sprinkle of the movie The Fugitive, and mixes it all together with the visceral vengeance of David Morell's First Blood.
— Jon Crunch Book Review

"This is one of the best thrillers of the year and highly recommended."
— The Free Lance Star (Fredericksburg)