Life Moves Pretty Fast: The Lessons We Learned from Eighties Movies (and Why We Don't Learn Them from Movies Anymore) (Paperback) 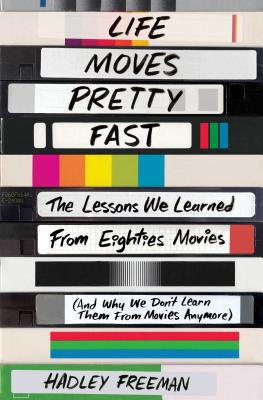 From Vogue contributor and Guardian columnist Hadley Freeman, a personalized guide to eighties movies that describes why they changed movie-making forever—featuring exclusive interviews with the producers, directors, writers and stars of the best cult classics.

For Hadley Freeman, movies of the 1980s have simply got it all. Comedy in Three Men and a Baby, Hannah and Her Sisters, Ghostbusters, and Back to the Future; all a teenager needs to know in Pretty in Pink, Ferris Bueller’s Day Off, Say Anything, The Breakfast Club, and Mystic Pizza; the ultimate in action from Top Gun, Die Hard, Beverly Hills Cop, and Indiana Jones and the Temple of Doom; love and sex in 9 1/2 Weeks, Splash, About Last Night, The Big Chill, and Bull Durham; and family fun in The Little Mermaid, ET, Big, Parenthood, and Lean On Me.

In Life Moves Pretty Fast, Hadley puts her obsessive movie geekery to good use, detailing the decade’s key players, genres, and tropes. She looks back on a cinematic world in which bankers are invariably evil, where children are always wiser than adults, where science is embraced with an intense enthusiasm, and the future viewed with giddy excitement. And, she considers how the changes between movies then and movies today say so much about society’s changing expectations of women, young people, and art—and explains why Pretty in Pink should be put on school syllabuses immediately.

From how John Hughes discovered Molly Ringwald, to how the friendship between Dan Aykroyd and John Belushi influenced the evolution of comedy, and how Eddie Murphy made America believe that race can be transcended, this is a “highly personal, witty love letter to eighties movies, but also an intellectually vigorous, well-researched take on the changing times of the film industry” (The Guardian).

Hadley Freeman is a columnist and writer for the Guardian newspaper in the UK. She was born in New York and lives in London. Her books include Life Moves Pretty Fast, The Meaning of Sunglasses, and Be Awesome, and her work has appeared in Vogue US and UK, New York magazine, Harper’s Bazaar, and many other publications.

"I love movies, Hadley Freeman and everything she has to say."
— Judy Blume

“An entertaining—and reaffirming—walking down memory lane for those of us who’ve worshipped at the Church of Molly Ringwald, and new initiates.”
— Chelsea Cain, New York Times bestselling author of One Kick

"Addicting...Life Moves Pretty Fast is a delightful collection of humorous, witty and sometimes poignant life lessons. It’s smart, clever and creative, much like the films on which it is based."
— Associated Press

"Ms. Freeman's love for the films she discusses is often infectious"
— The Wall Street Journal

“In this love letter to ’80s popcorn cinema, Guardian columnist Freeman breaks down the life lessons that she gleaned from the work of John Hughes, John Landis, and John Cusack, among many others…she uses anecdotes from her own life, interviews with actors and filmmakers, and feminist-flavored social commentary to drive home the continuing relevance of the films, which include Back to the Future, Dirty Dancing, and Ghostbusters. Freeman amply demonstrates why the hits of three decades ago are still beloved of many—not least for their now- nostalgic sound track choices and core themes of life, love, and friendship…informative and humorous.”
— Publishers Weekly

“With lists such as the best montages of the decade, this book will inspire readers to rewatch their favorite 1980’s films with a more appreciative (and critical) eye.”
— Library Journal