The Japanese Lover: A Novel (Paperback) 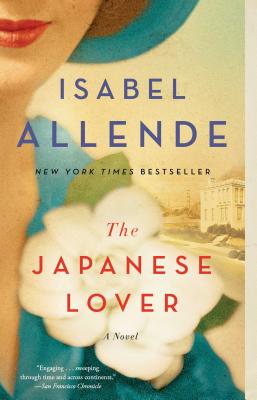 From New York Times bestselling author Isabel Allende, “a magical and sweeping” (Publishers Weekly, starred review) love story and multigenerational epic that stretches from San Francisco in the present-day to Poland and the United States during World War II.

In 1939, as Poland falls under the shadow of the Nazis, young Alma Belasco’s parents send her away to live in safety with an aunt and uncle in their opulent mansion in San Francisco. There, as the rest of the world goes to war, she encounters Ichimei Fukuda, the quiet and gentle son of the family’s Japanese gardener. Unnoticed by those around them, a tender love affair begins to blossom. Following the Japanese attack on Pearl Harbor, the two are cruelly pulled apart as Ichimei and his family—like thousands of other Japanese Americans—are declared enemies and forcibly relocated to internment camps run by the United States government. Throughout their lifetimes, Alma and Ichimei reunite again and again, but theirs is a love that they are forever forced to hide from the world.

Decades later, Alma is nearing the end of her long and eventful life. Irina Bazili, a care worker struggling to come to terms with her own troubled past, meets the elderly woman and her grandson, Seth, at San Francisco’s charmingly eccentric Lark House nursing home. As Irina and Seth forge a friendship, they become intrigued by a series of mysterious gifts and letters sent to Alma, eventually learning about Ichimei and this extraordinary secret passion that has endured for nearly seventy years.

Sweeping through time and spanning generations and continents, The Japanese Lover is written with the same keen understanding of her characters that Isabel Allende has been known for since her landmark first novel The House of the Spirits. The Japanese Lover is a moving tribute to the constancy of the human heart in a world of unceasing change.

Born in Peru and raised in Chile, Isabel Allende is the author of a number of bestselling and critically acclaimed books, including The House of the Spirits, Of Love and Shadows, Eva Luna, The Stories of Eva Luna, Paula, and The Japanese Lover. Her books have been translated into more than thirty-five languages and have sold more than 65 million copies worldwide. She is the receipient of the Medal for Distinguished Contribution to American Letters, and she divides her time between California and Chile.

"The Japanese Lover is animated by the same lush spirit that has sold 65 million copies of her books around the world... a novel that’s a pleasure to recommend."
— The Washington Post

"[A] fairy tale of a novel...As in all of Allende's fiction, we find a large, colorful cast of characters..."
— New York Times Book Review

“[Allende] is a dazzling storyteller, with a wry, sometimes dark, wit and a great eye for society's changing fashions. She may be writing a fairy tale for adults, but like the best of the genre, it's almost irresistible.”
— Associated Press

"Like the incomparable storyteller she is, Isabel Allende does not release us from the novel's spell until the last pages, with a brief but bittersweet hint of her famed magical realism."
— Miami Herald

“With The Japanese Lover, Allende reminds us that, while not everyone has a true love, we all have loves that are true. Whether they be passionate, familial, unrequited or timeless,the one constant in our lives is love. And Isabel Allende celebrates them all, beautifully.”
— USA Today

"Allende's engrossing narrative spans 70 years of tumultuous world history, but the powerful message you'll take away is that love -- all kinds of love -- will take root and endure under the most harrowing conditions."
— People Magazine, Book of the Week

“With her engaging new novel, “The Japanese Lover,” Allende brings us a tale at once global and rooted deeply in Bay Area history, sweeping through time and across continents to explore the inner lives of two very different women in contemporary California.”
— San Francisco Chronicle

"The Japanese Lover is a poetic and profound meditation on the power of love: a common theme, sure, but in Allende's capable hands this trope is made utterly new."
— Bustle

"Themes of lasting passion, friendship, reflections in old age, and how people react to challenging circumstances all feature in Allende’s newest saga, which moves from modern San Francisco back to the traumatic WWII years. As always, her lively storytelling pulls readers into her characters’ lives immediately… the story has many heart felt moments, and readers will be lining up for it."
— Booklist

"Allende, as always, gives progress and hopeful spirits their due."
— Kirkus

"Isabel Allende's oeuvre ranges widely...but The Japanese Lover, her lushly detailed new work, may be her most expansive yet..."
— Library Journal

"[A] lovely, easy-to-read novel...Like a perfect onion, the book slowly reveals the secrets of Alma’s past, which primarily revolves around a secret, decades-long affair with a Japanese gardener."
— Goop

"The latest from the writer who's been called Gabriel Garcia Marquez's successor. It's a love story that covers a lot of ground, from Nazi-occupied Poland to present-day San Francisco. You won’t want to put it down."
— theSkimm

"...rich with lyrical prose and compelling plot turns. This is Allende at her very best."
— Purewow.com

"[Allende] is a dazzling storyteller, with a wry, sometimes dark, wit and a great eye for society's changing fashions. She may be writing a fairy tale for adults, but like the best of the genre, it's almost irresistible."
— Times Union

"TheJapanese Lover" erects two thematic pillars of love and prejudice toproduce a story that strikes a masterful emotional balance. More importantly,the novel crafts characters that are profoundly compelling in their complexstruggle to value love despite forces—youth and age, proximity and distance,society and self—beyond their control.”
— Harvard Crimson

“She is a dazzling storyteller,with a wry, sometimes dark, wit and a great eye for society’s changingfashions”
— The National

“Thespectre of the war and the illicit treatment of Japanese-Americans are neverlost on the reader, although Allende is too subtle a writer to do any realproselytizing. It is a beautiful and significant love story that she tells,although I was so much more interested in her than in Ichimei as a character.”
— Book Reporter

With end-of-life issues looming over Alma, “The Japanese Lover” can’t be called lighthearted. But it’s often wryly funny, and always an absorbing argument for the power of love.
— St. Louis Post Dispatch

"'Pretty brilliant,' I said once I closed the cover — literary fiction at its best.”
— The Missourian