New Kids in the World Cup: The Totally Late '80s and Early '90s Tale of the Team That Changed American Soccer Forever (Hardcover) 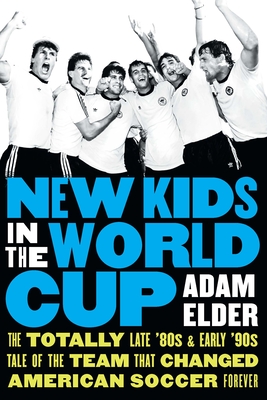 In 1990, though no one knew it then, a fearless group of players changed the sport of soccer in the United States forever. Young, bronzed, and mulleted, they were America’s finest athletes in a sport that America loved to hate. Even sportswriters rooted against them. Yet this team defied massive odds and qualified for the World Cup, making possible America’s current obsession with the world’s most popular game.

In this era, a U.S. Soccer Federation head coach had a better-paying day job as a black-tie restaurant waiter. Players earned $20 a day. The crowd at home games cheered for their opponent, and the fields were even mismarked. In Latin America the U.S. team bus had a machine gun turret mounted on the back, locals would sabotage their hotel, and in the stadiums spectators would rain coins, batteries, and plastic bags of urine down on the American players. The world considered the U.S. team to be total imposters—the Milli Vanilli of soccer. Yet on the biggest stage of all, in the 1990 World Cup, this undaunted American squad and their wise coach earned the adoration of Italy’s star players and their fans in a gladiator-like match in Rome’s deafening Stadio Olimpico.

From windswept soccer fields in the U.S. heartland to the CIA-infested cauldron of Central America and the Caribbean, behind the recently toppled Iron Curtain and into the great European soccer cathedrals, New Kids in the World Cup is the origin story of modern American soccer in a time when power ballads were inescapable and mainstream America was discovering hip-hop. It’s the true adventure of America’s most important soccer team, which made possible everything that’s come since—including America finally falling in love with soccer.

For more information about the book visit newkidsintheworldcup.com

Adam Elder is an award-winning journalist and editor whose soccer writing has appeared in the New York Times, the Wall Street Journal, The Guardian, Newyorker.com, and Wired.com. A former managing editor of Triathlete and Competitor magazines, he has also written for Esquire, Air Mail, Vice, ESPN.com, Outside Online, and MEL Magazine.

"Elder has written a book that any American reader who enjoys today's version of soccer in the United States should read."—Lance Smith, Guy Who Reviews Sports Books

“Men’s soccer in America has taken a long and winding road to get to the glitz and glamour we now see with MLS, USL, and the national team. This book is an important reminder to appreciate those who helped build the sport when nobody else cared about soccer. Every page filled me with gratitude for those who came before me.”—Landon Donovan, former U.S. Men’s National Team captain and co-all-time-leading scorer

“A book that transports the reader back to a time when the best male footballers this nation produced toiled way below the radar. Huge love for Adam Elder, who has poured his energy into reconstructing a story that begins with shirtless dancing on a California beach with O.J. Simpson and spirals away from there. Reading this is a reminder of how far we have come, so fast, from a men’s footballing perspective.”—Roger Bennett, cohost of the TV show Men in Blazers