Sold on a Monday: A Novel (Paperback) 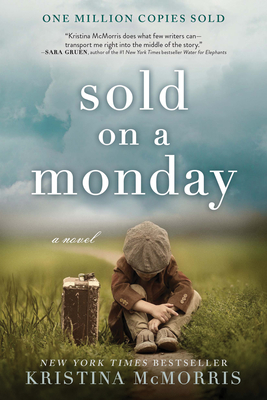 A NEW YORK TIMES BESTSELLER WITH MORE THAN A MILLION COPIES SOLD—Sold on a Monday is the unforgettable book-club phenomenon, inspired by a stunning piece of Depression-era history.

2 CHILDREN FOR SALE. The sign is a last resort. It sits on a farmhouse porch in 1931, but could be found anywhere in an era of breadlines, bank runs and broken dreams. It could have been written by any mother facing impossible choices.

For struggling reporter Ellis Reed, the gut-wrenching scene evokes memories of his family's dark past. He snaps a photograph of the children, not meant for publication. But when it leads to his big break, the consequences are more devastating than he ever imagined.

Inspired by an actual newspaper photograph that stunned the nation, Sold on a Monday has celebrated five months on the New York Times bestsellers list and continues to especially captivate fans of Lisa Wingate's Before We Were Yours and Kristin Hannah's The Four Winds.

Look for the new novel by Kristina McMorris, The Ways We Hide, a sweeping World War II tale of an illusionist whose recruitment by British intelligence sets her on a perilous, heartrending path, available September 2022.

Kristina McMorris is a New York Times bestselling author of two novellas and six novels, including the runaway bestseller Sold on a Monday. Initially inspired by her grandparents' WWII courtship letters, her works of fiction have garnered more than twenty national literary awards. Prior to her writing career, she owned a wedding-and-event planning company until she had far surpassed her limit of YMCA and chicken dances. She also worked as a weekly TV-show host for Warner Bros. and an ABC affiliate, beginning at age nine with an Emmy Award-winning program. A graduate of Pepperdine University, she lives near Portland, Oregon, where (ironically) she's entirely deficient of a green thumb and doesn't own a single umbrella.

"McMorris shines in this poignant and compulsively readable novel about how one reporter's seemingly small mistake in judgment leads to utter catastrophe for children caught in the jaws of the Great Depression. Based upon a haunting historical photograph, and told with finesse and compassion, this story will linger long after the pages have all been turned." — Stephanie Dray, New York Times bestselling author of America's First Daughter and My Dear Hamilton

"The sale of two young children leads to devastating consequences in this historical tearjerker from McMorris... Set against the hardscrabble backdrop of the Great Depression, McMorris's altruistic and sometimes damaged characters have moral compasses that realistically waver. A tender love story enriches a complex plot, giving readers a story with grit, substance, and rich historical detail." — Publishers Weekly

"Despite the sensitivity of the subject of missing children, McMorris' latest is touching and never maudlin. This book may appeal to fans of Lisa Wingate's Before We Were Yours (2017)." — Booklist

"With her signature style, Kristina McMorris once again plucks a devastating heartstring. Readers are transported through time and place to the desperate days of the American Great Depression. A real-life photograph stands as evidence to the heart of this novel: truth revealed, forgiveness found, and a story never to be forgotten." — Sarah McCoy, New York Times and international bestselling author of Marilla of Green Gables and The Baker's Daughter

"Kristina McMorris evokes such a strong sense of place in her writing that to open her books feels less like reading and more like traveling." — BookPage

"Kristina McMorris does what few writers can—transport me right into the middle of the story." — Sara Gruen, #1 New York Times bestselling author

"In Sold on a Monday, Kristina McMorris has written a vivid and original story, set against the harsh landscape of the Great Depression. McMorris brilliantly chronicles the way in which a moment's fateful choice can result in a lifetime of harrowing consequences. A masterpiece that poignantly echoes universal themes of loss and redemption, Sold on a Monday is both heartfelt and heartbreaking." — Pam Jenoff, New York Times bestselling author of The Orphan's Tale