The President Is Missing: A Novel (CD-Audio) 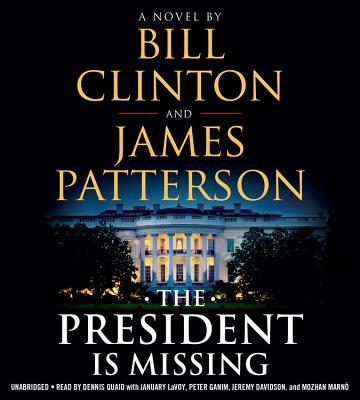 Don't miss the #1 New York Times bestselling thriller from the world's bestselling author, James Patterson: an "undeniably gripping ride through the hidden passageways of power and politics" that "moves like Air Force One" (Michael Connelly).
The President Is Missing confronts a threat so huge that it jeopardizes not just Pennsylvania Avenue and Wall Street, but all of America. Uncertainty and fear grip the nation. There are whispers of cyberterror and espionage and a traitor in the Cabinet. Even the President himself becomes a suspect, and then he disappears from public view . . .
Set over the course of three days, The President Is Missing sheds a stunning light upon the inner workings and vulnerabilities of our nation. Filled with information that only a former commander in chief could know, this is the most authentic, terrifying novel to come along in many years.
#1 New York Times bestseller#1 USA Today bestseller#1 Wall Street Journal bestseller#1 Indie bestseller
"President Duncan for a second term!" -- USA Today"This book's a big one." -- New York Times"Towers above most political thrillers." -- Pittsburgh Post-Gazette"The plotting is immaculate . . . the writing is taut." -- Sunday Times (London)"Ambitious and wildly readable." -- New York Times Book Review

Bill Clinton was elected President of the United States in 1992, and he served until 2001. After leaving the White House, he established the Clinton Foundation, which helps improve global health, increase opportunity for girls and women, reduce childhood obesity and preventable diseases, create economic opportunity and growth, and address the effects of climate change. He is the author of a number of nonfiction works, including My Life, which was a #1 international bestseller. This is his first novel.
James Patterson received the Literarian Award for Outstanding Service to the American Literary Community from the National Book Foundation. He holds the Guinness World Record for the most #1 New York Times bestsellers, and his books have sold more than 375 million copies worldwide. A tireless champion of the power of books and reading, Patterson created a new children's book imprint, JIMMY Patterson, whose mission is simple: "We want every kid who finishes a JIMMY Book to say, 'PLEASE GIVE ME ANOTHER BOOK.'" He has donated more than one million books to students and soldiers and funds over four hundred Teacher Education Scholarships at twenty-four colleges and universities. He has also donated millions of dollars to independent bookstores and school libraries. Patterson invests proceeds from the sales of JIMMY Patterson Books in pro-reading initiatives.

Praise for The President Is Missing:

"It's a go-to read. It maximizes its potency and fulfills its mission. There's a twist or two of which Frederick Forsyth might be proud. So, if you want to make the most of your late-capitalist leisure-time, hit the couch, crack a Bud, punch the book open, focus your squint, and enjoy."

"Sure to entice millions of readers . . . the novel is fascinating . . . President Duncan for a second term!"
—USA Today

"The President Is Missingfeels like the result of a strong collaboration . . . It's driven by star power and persuasive-sounding presidential candor . . . This book's a big one."
—New York Times

"An extraordinary event . . . the pages spark to DEFCON 1."
—Washington Post

"This book moves like Air Force One. Big and fast. Clinton and Patterson are a dream combo. Two great storytellers, one inside and one outside, both at the top of the game. They've put together an undeniably gripping ride through the hidden passageways of power and politics. This book teaches as much as it entertains."
—Michael Connelly, #1 bestselling author of the Ballard and Bosch series

"The pages of The President Is Missing are filled with the classic tropes of a big commercial thriller . . . but the authors resist pure escapism . . . The pleasure of this book is in imagining the wild tales Clinton might disclose about his own years as President, if only he could."
—Time

"The plotting is immaculate... the writing is taut."—Sunday Times (London)

"The clock ticks, suspense builds. . . [to] a satisfying twist at the end."
—Newsday

"The plot is epic."
—The Economist

"A first-rate collaboration from a couple of real pros! Engrossing from page one."
—David Baldacci, #1 bestselling author of The Fallen

"Could I put The President Is Missing down? Of course not . . . The climax is very exciting."
— Bloomberg

"Compelling from page one. A fantastic read!"
—Mary Higgins Clark, #1 bestselling author of I've Got My Eyes on You

"A high-octane collaboration . . . the addictivequalities are undeniable."
—Daily Telegraph (London)

"Marry the political savvy of Bill Clinton with the craftsmanship of James Patterson and you get a fabulously entertaining thriller that is meticulous in its portrayal of Washington politics, gripping in its pacing, and harrowing in its depiction of the perils of cyberwarfare. This dark tale is, at bottom, a warning and a prophecy about the mortal threats to our democracy posed by terrorists abroad, homegrown extremism, and the technological miracles that have rendered us both powerful and defenseless at once."
—Ron Chernow, #1 bestselling and Pulitzer Prize-winning author of Grant

"The novel's accelerated pace of action is one of the novel's strongest assets, along with a roster of intriguing characters . . . a clever, brave and moral leader that any free nation would be lucky to have at the helm."
—Columbus Dispatch

"Addictive. . .The President Is Missing towers above most political thrillers . . . Must read."
—Pittsburgh Post-Gazette

"The President Is Missing is heart-pounding, gripping, terrifying. As I read, ferociously turning the pages, I kept asking myself, 'Could this really happen?' Bill Clinton's insight into the pressures of being president and life in the White House coupled with James Patterson's chops as an action writer have combined to give us a genuinely masterful thriller. My knuckles are still white!"
—Louise Penny, #1 bestselling author of Glass Houses

"Bill Clinton and James Patterson seamlessly craft a heady thriller revealing the razor-thin edge between policy and ambition, politics and patriotism. They provide a front-row seat to the inner workings of our political system, a plot that is frighteningly plausible, and a cast of complex characters--both men and women--who all have their own stake to claim. The result: a fast-paced summer read you'll see on planes, trains, and every beach across the country and around the world."
—Walter Mosley, bestselling author of the Easy Rawlins series

*"Clinton and Patterson are a dynamic duo weaving a suspenseful and gripping technothriller that will leave readers wondering, 'Could this really happen?' Highly recommended for thriller and suspense fans."
—Library Journal, starred review

*"A page-turning thriller. The authors keep the suspense high . . . Fans of the TV series 24 and the movie Air Force One will be riveted."—Publishers Weekly, starred review

"The President Is Missing is a big, splashy juggernaut of a novel, combining thrills with a truly authentic look at the inner happenings in Washington. I read it in one gulp. You will too."
—Harlan Coben, #1 bestselling author of Don't Let Go

"The combination of Patterson's lightning pace and Clinton's tantalizing inside knowledge of how terrorists operate is what make this timely novel so vivid, engrossing--and authentically frightening."
—Carl Hiaasen, bestelling author of Razor Girl

"From the pens of two American icons comes a political thriller that rocks. The President Is Missing entertains, educates, and inspires us all to put our country above our politics. Bill Clinton delivers the art of government and James Patterson delivers the art of writing. The reader gets a helluva story."
—Nelson DeMille, #1 bestselling author of The Cuban Affair

"Truth hides on every page in this fiction--scary, remarkable truth that can only come from the ultimate insider. The President Is Missing is more than a book, it's a skeleton key that lets you inside the head of a U.S. president. What a surprising treat."
—Brad Meltzer, #1 bestselling author of The Escape Artist

"The President Is Missing ticks every box for top-notch thriller writing: A relentlessly fast plot, utterly unexpected reversals and twists, a compelling--and a thoroughly human--hero, and a searing and honest examination of issues that strike close to our hearts as Americans in this day and age. Bravo, James Patterson and Bill Clinton!"
—Jeffrey Deaver, bestselling author of The Bone Collector and The Cutting Edge

"A bullet train of a thriller, power-fueled by equal parts adrenaline and expertise. Timely, furiously paced, and crackling with authenticity, it's The Day of the Jackal for the 21st century."
—A. J. Finn, #1 bestselling author of The Woman in the Window