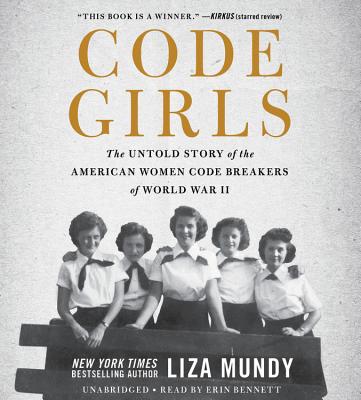 “There is so much arguing these days over the existence of women in STEM fields and whether they should be allowed to be there. 'Oh honey,' says Code Girls, wrapping an arm around your shoulder, 'we never left.' In riveting prose, Mundy shows the presence of these women from the very beginning -and then how they were almost forcibly forgotten after the war was over. Women who once had only a life of school-teaching to look forward to (even with a PhD) became people who saved lives and sunk ships. This book exists to remind us that women have always been in these stories, even if they're not shown.”
— Alice Ahn, Water Street Books, Exeter, NH

“I was stunned to learn that over 10,000 women served the U.S. during WWII as code breakers. They’d been instructed to keep their work strictly secret and to tell friends and family that they were working as secretaries for the war effort. Now their stories and efforts are becoming known. Time to ask Grandma if she was a secret cryptographer in the war.”
— Genevieve Taylor, Boulder Book Store, Boulder, CO

The award-winning New York Times bestseller about the American women who secretly served as codebreakers during World War II--a "prodigiously researched and engrossing" (New York Times) book that "shines a light on a hidden chapter of American history" (Denver Post).

Recruited by the U.S. Army and Navy from small towns and elite colleges, more than ten thousand women served as codebreakers during World War II. While their brothers and boyfriends took up arms, these women moved to Washington and learned the meticulous work of code-breaking. Their efforts shortened the war, saved countless lives, and gave them access to careers previously denied to them. A strict vow of secrecy nearly erased their efforts from history; now, through dazzling research and interviews with surviving code girls, bestselling author Liza Mundy brings to life this riveting and vital story of American courage, service, and scientific accomplishment.

New York Times bestselling author Liza Mundy is a former reporter at the Washington Post and contributes to numerous publications including the Atlantic, TIME, the New York Times, the New Republic, Slate, Mother Jones, Spectator (UK), and the Guardian. She is a frequent commentator on countless prominent national television, radio, and online news outlets.

"Irresistible.... We
owe Mundy gratitude for rescuing these hidden figures from obscurity. Even more
valuable is her challenge to the myth of the eccentric, inspired, solitary male
genius, like Alan Turing."—Elaine Showalter, Washington Post

"Code Girls...finally gives due to the courageous women who worked in the wartime intelligence community."—Smithsonian.com

"Code Girls is a riveting account of the thousands of young coeds who flooded into Washington to help America win World War II. Liza Mundy has written a thrilling page-turner that illuminates the patriotism, rivalry, and sexism of the code-breakers' world."—Lynn Povich, authorof The Good Girls Revolt

"Code Girls is an extraordinary book by an extraordinary author. Liza Mundy's portraits of World War II codebreakers are so skillfully and vividly drawn that I felt as if I were right there with them--mastering ciphers, outwitting the Japanese army, sinking ships, breaking hearts, and even accidentally insulting Eleanor Roosevelt. I am an evangelist for this book: You must read it."—Karen Abbott, NewYork Times bestselling author of Sin in the Second City and Liar,Temptress, Solider, Spy

"Code Girls reveals a hidden army of female cryptographers, whose work played a crucial role in ending World War II. With clarity and insight, Mundy exposes the intertwined narratives of the women who broke codes and the burgeoning field of military intelligence in the 1940s. I cannot overstate the importance of this book; Mundy has rescued a piece of forgotten history, and given these American heroes the recognition they deserve."—Nathalia Holt, NewYork Times bestselling author of Rise of the Rocket Girls

"Mundy is a fine storyteller.... A sleek, compelling
narrative.... The book is a winner. Her descriptions of codes and ciphers, how
they worked and how they were broken, are remarkably clear and accessible. A
well-researched, compellingly written, crucial addition to the literature of
American involvement in World War II."—Kirkus (starred review)

"Similar to Nathalia Holt's The Rise of the Rocket Girls and Margot Lee Shetterly's Hidden Figures, this is indispensable and fascinating history. Highly recommended for all readers."—LibraryJournal (starred review)

"Extraordinary.... Mundy's book is expansive and
precise. It's anecdotal enough to make it an entertaining read for the
layperson, and there's plenty of technical detail to interest the crypto-nerd."—Houston Chronicle

"Salvaging this essential piece of American military history from certain obscurity, Mundy's painstaking and dedicated research produces an eye-opening glimpse into a crucial aspect of U.S. military operations and pays overdue homage to neglected heroines of WWII. Fans of Hidden Figures (2016) and its exposé of unsung talent will revel in Mundy's equally captivating portraits of women of sacrifice, initiative, and dedication."—Booklist (starred review)

"Astonishing.... Mundy, who mined US National Security
Agency archives and interviewed survivors for the book, joins authors such as
Margot Lee Shetterly and Nathalia Holt in giving the women behind great
twentieth-century scientific endeavors their due."—Nature

"Mundy unveils the untold story of a very important part of American History that otherwise would have been kept secret."—Miami Herald

"Fans of Hidden Figures .... will love this true story of the women who cracked German and Japanese military code during World War II."—Entertainment Weekly (Grade: A-)

"The book not only shines a light on a hidden chapter
of American history, it also tells the kind of story of courage and
determination that makes you want to work harder and be better."—Denver Post

"Women who helped bring victory achieve
visibility, at last, in this history."—Military Times

"Enlightening... riveting and engaging...Liza Mundy's richly detailed account of their experiences will, hopefully, help give these dedicated and patriotic women the long overdue recognition they deserve."
—Finger Lakes Times