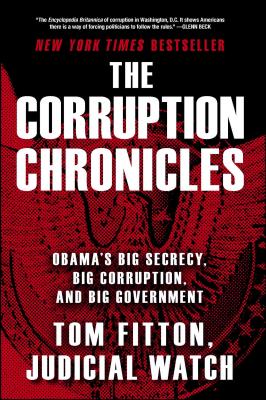 Judicial Watch, America’s largest non-partisan government watchdog, has investigated the Clinton, Bush, and Obama administrations. Judicial Watch is the group that helped impeach Bill Clinton and took the Bush White House secrecy all the way up to the Supreme Court. Since the beginning of the Obama administration, this grassroots group has filed over 700 open records demands and dozens of lawsuits, including a successful fight over the secret Obama White House visitor logs. In this book, Fitton reveals what Judicial Watch has uncovered in its battles on high-profile issues, such as the bailouts, Obamacare, terrorism, the Black Panther scandal, czars, the ACORN network, illegal immigration and stealth amnesty, the Obama White House’s actions against FOX News Channel, and Obama’s radical Chicago connections.

The book provides highlights of Judicial Watch’s historic role in pursuing corruption and the truth during the Clinton and Bush administrations. The Corruption Chronicles comprehensively highlights how the Obama administration, which promised to be the most transparent administration in history, became the most secretive in a generation, and it exposes the inside facts that the Obama administration has desperately fought—sometimes in court—to keep from the American people. A major feature documentary film is slated to debut nationally in late Spring 2012 and will tie in to and support the release of Secrets. Both the film and the book will educate the American public about the Obama White House’s creation of a government “transparency crisis” in Washington, DC.

Tom Fitton serves as president of Judicial Watch and brings thirty years’ experience in conservative public policy to America’s largest and most effective government watchdog organization. The author of the New York Times bestselling The Corruption Chronicles and Clean House, Fitton is one of the world’s leading experts on government corruption, with Judicial Watch having filed hundreds of lawsuits to expose government misconduct and abuse. Fitton holds a BA from George Washington University. Visit JudicialWatch.org.

“The Corruption Chronicles is the Encyclopedia Britannica of corruption in Washington DC.  It shows Americans that there is a way of forcing DC politicians to follow the rules.”
— Glenn Beck, #1 bestselling author of Miracles and Massacres