Beneath the Backbone of the World: Blackfoot People and the North American Borderlands, 1720-1877 (Paperback) 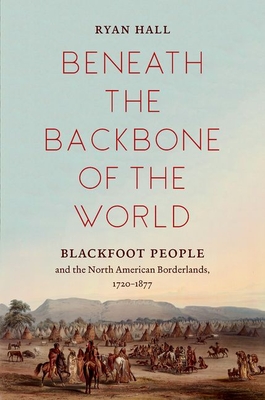 For the better part of two centuries, between 1720 and 1877, the Blackfoot (Niitsitapi) people controlled a vast region of what is now the U.S. and Canadian Great Plains. As one of the most expansive and powerful Indigenous groups on the continent, they dominated the northern imperial borderlands of North America. The Blackfoot maintained their control even as their homeland became the site of intense competition between white fur traders, frequent warfare between Indigenous nations, and profound ecological transformation. In an era of violent and wrenching change, Blackfoot people relied on their mastery of their homelands' unique geography to maintain their way of life.

With extensive archival research from both the United States and Canada, Ryan Hall shows for the first time how the Blackfoot used their borderlands position to create one of North America's most vibrant and lasting Indigenous homelands. This book sheds light on a phase of Native and settler relations that is often elided in conventional interpretations of Western history, and demonstrates how the Blackfoot exercised significant power, resiliency, and persistence in the face of colonial change.