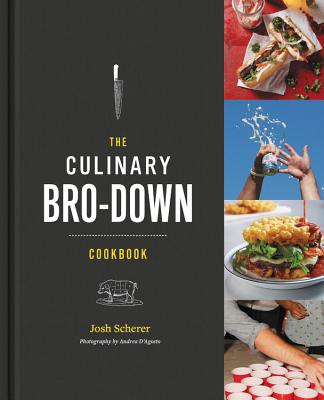 There was never anything wrong with instant ramen. But there was never anything wrong with not being on the moon, either. That didn't stop Neil Armstrong, Buzz Aldrin, and that other guy* from changing the course of human history with a few daring steps and a super dope catchphrase. So too shall journalist and blogger Josh Scherer change the course of late-night, often-insane, sometimes-smart-but-always-monstrous munchie food that puts your MSG packet garbage to shame.

You'll find more than seventy creations broken into the ten "brossential" food groups like: Beer, Fried Things, Tacos, and Struggle Snacks (because money is hard). Josh's recipes range from indulgent eats like Beer-Poached Bratwurst Party Subs and Mac 'n' Cheese Nachos to hella-classy dishes like Broccolini with Burnt Lemon Hollandaise and Pork Belly Tacos with Fish Sauce Caramel. Sprinkled in are the unholy commandments for bro cooking, such as "bagged wine is the only wine you need," and Josh's expert advice on how to beat a hangover (it's mostly just pastrami and emotionally purging movies).

The Culinary Bro-Down Cookbook is full of irreverent essays and anecdotes, but running throughout is a deep sense of soul and self that strives to answer the question: Why can't the deep-fried nonsense you eat with your bros at 2 a.m. have the same emotional gravitas as an intimate family dinner?

Josh Scherer is an LA-based food writer whose writing has appeared in Los Angeles Magazine, Eater, Food & Wine, Epicurious, Maxim, LA Weekly, Thrillest, First We Feast, and VICE Munchies. His blog Culinary Bro-Down was named a finalist for best writing in Saveur magazine's Best Food Blog Awards 2014. He was a mediocre-at-best hammer thrower for UCLA's track and field team and an equally mediocre political science student. He lives in Los Angeles with his girlfriend and two extremely shitty cats.