The Mountain: My Time on Everest (Hardcover) 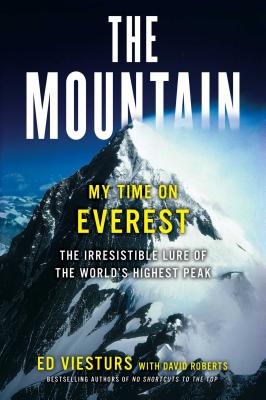 In national bestseller The Mountain, world-renowned climber and bestselling author Ed Viesturs and cowriter David Roberts paint a vivid portrait of obsession, dedication, and human achievement in a true love letter to the world’s highest peak.

In The Mountain, veteran world-class climber and bestselling author Ed Viesturs—the only American to have climbed all fourteen of the world’s 8,000-meter peaks—trains his sights on Mount Everest in richly detailed accounts of expeditions that are by turns personal, harrowing, deadly, and inspiring.

The highest mountain on earth, Everest remains the ultimate goal for serious high-altitude climbers. Viesturs has gone on eleven expeditions to Everest, spending more than two years of his life on the mountain and reaching the summit seven times. No climber today is better poised to survey Everest’s various ascents—both personal and historic. Viesturs sheds light on the fate of Mallory and Irvine, whose 1924 disappearance just 800 feet from the summit remains one of mountaineering’s greatest mysteries, as well as the multiple tragic last days of Rob Hall and Scott Fischer in 1996, the stuff of which Into Thin Air was made.

Informed by the experience of one who has truly been there, The Mountain affords a rare glimpse into that place on earth where Heraclitus’s maxim—“Character is destiny”—is proved time and again.

“Mr. Viesturs has crafted a breezy tour through his many Everest ascents. . . . Armchair adventurers will rip through this addition to the Everest canon, and for anyone not intimate with Everest’s adventurous history, The Mountain marks a fine beginning.”

"Viesturs peppers the narrative with commonsense wisdom, . . . but the book's best moments come when he focuses on the unsung Everest achievements that inspire him. The tale of the Polish expedition that made the first winter ascent and the badass exploits of little-known Swiss climber Erhard Loretan are a welcome distraction from all the dead bodies."

“In this amiable history/memoir hybrid . . . Viesturs is a fountain of firsthand knowledge and straightforward narration, and the book makes for a good read. As the only American who has summited the world’s 14 highest peaks without bottled oxygen, Viesturs has a different ruler than the rest of us by which to measure risk.”

"[Viesturs] . . . unearths some interesting tidbits that may be well-known to his community but new to laymen. The author, who has been lauded for his compassion and assistance to other climbers, also brings an unexpected attribute: attitude."

"This book is Ed’s love letter and farewell to Everest. . . . It is written in an engaging, approachable manner that will have you turning the pages just to find out what happens next. Whether you routinely visit the Himalaya on your own adventures or find yourself out of wind simply going up a flight of stairs, we wholeheartedly recommend this book."
— Kraig Becker

"A detailed, nicely told account of a man’s endurance and perseverance in achieving a singular goal."

“Viesturs and Roberts have written an exhaustively researched and wonderfully compelling history of the most fascinating and dangerous of the Himalayan giants.”
— David Breashears

“The Will to Climb captures the essence and spirit of the great sport of mountaineering… For anyone who loves the outdoors and for those who admire the will of mankind, this book is a must-read."
— Tod Leiweke, CEO of Tampa Bay Lightning

"An American master of the climb…Viesturs's you-are-there narration communicates effortlessly the enormous effort, and high adventure, of scaling K2."

“A compelling story of dedication, desperation, danger, derring-do, and devotion (physical and spiritual). Fans of extreme-sport books, especially tales of high adventure, will want to add this one to their collections."
— Booklist

“Ed Viesturs was an inspiration to me personally and to the Seahawks team in 2005. I highly recommend reading this account of one of America’s heroes.”
— Mike Holmgren, coach of the Seattle Seahawks

"From the drama of the peaks, to the struggle of making a living as a professional climber, to the basic how-tos of life at 26,000 feet, No Shortcuts to the Top is fascinating reading."
— Aron Ralston, author of Between a Rock and a Hard Place

"Ed Viesturs—the first American to climb all fourteen 8,000 meter peaks without bottled oxygen—is an animal. A human animal blessed with enormous strength balanced by intelligence, honesty, and a heart of gold. And besides, HE IS A NICE GUY. This is a great read for those of us who climb, those who want to learn to climb and live to tell about it, and those who like great adventures."
— Jim Whittaker, first American to climb Mount Everest,

“From his earliest climbs on the peaks of the Pacific Northwest to his final climb up the Himalayan mountain of Annapurna, Viesturs offers testimony to the sacrifices (personal and professional) in giving your life over to a dream, as well as the thrill of seeing it through.”
— Publishers Weekly

"Ed Viesturs is not merely one of our strongest mountaineers; he’s also one of the most remarkable. He’s demonstrated that it’s possible to climb the world’s highest peaks without taking reckless chances, and without sacrificing one’s honor or integrity. He has never hesitated to help other climbers in need, even when it meant putting himself in danger or sacrificing his own opportunity to achieve a summit. Ed, simply put, is a genuine American hero.”
— Jon Krakauer, author of Into Thin Air