The Book of Killowen (Paperback) 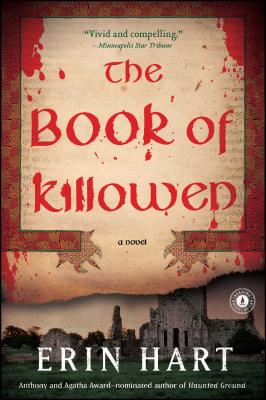 “Hart combines powerful insights into human nature and pristine prose with history and archeology in her stellar fourth crime novel” (Publishers Weekly) about an ancient volume of philosophical heresy that provides a motive for murder.

After a year away from working in the field, archaeologist Cormac Maguire and pathologist Nora Gavin are back in the bogs, investigating a ninth-century body found buried in the trunk of a car. They discover that the ancient corpse is not alone—pinned beneath it is the body of Benedict Kavanagh, missing for mere months and familiar to television viewers as a philosopher who enjoyed destroying his opponents in debate. Both men were viciously murdered, but centuries apart—so how did they end up buried together in the bog?

While on the case, Cormac and Nora lodge at Killowen, a nearby artists’ colony, organic farm, and sanctuary for eccentric souls. Digging deeper into the older crime, they become entangled in high-stakes intrigue encompassing Kavanagh’s death while surrounded by suspects in his ghastly murder. It seems that everyone at Killowen has some secret to protect. Set in modern-day Ireland, The Book of Killowen reveals a new twist on the power of language—and on the eternal mysteries of good and evil.

Erin Hart is a theater critic and former administrator at the Minnesota State Arts Board. A lifelong interest in Irish traditional music led her to cofound Minnesota’s Irish Music and Dance Association. She and her husband, musician Paddy O’Brien, live in St. Paul, Minnesota, and frequently visit Ireland. Erin Hart was nominated for the Agatha and Anthony Awards for her debut novel, Haunted Ground, and won the Friends of American Writers Award in 2004. Visit her website at ErinHart.com.

Can the arcane science and lore of the Irish "bog people," who often died alone and in agony, be fuel for a mystery that actually does what The Da Vinci Code tried to do? A thousand times yes, if Erin Hart's storytelling witchery is at work. Intelligent, eerie, utterly compelling.
— Jacquelyn Mitchard, author of The Deep End of the Ocean and What We Saw At Night

“Hart’s foray into soggy Killowen has a rock-solid foundation of musical language and deft plotting.”
— Kirkus

"Hart combines powerful insights into human nature and pristine prose with history and archeology in her stellar fourth crime novel… [The Book of Killowen] offers food for thought that persists beyond the immediate thrill of a well-told tale.”
— Publishers Weekly

"A textured, multifaceted plot that holds the reader from beginning to end. And a high energy,

exciting finale [that] only adds to the pleasure. Another strong entry in an outstanding series."
— Booklist

THE BOOK OF KILLOWEN is as much a treasure as the archeological marvels the peat preserves. It leaves the reader satisfied, yet yearning for the next adventure of this likeable pair of sleuths.
— ILoveaMysteryNewsletter.com

"Fascinating.... The nature of language and love...winds through Hart's plot in intriguing and surprising ways."
— Milwaukee Journal Sentinel