Me, the Mob, and the Music: One Helluva Ride with Tommy James & The Shondells (Paperback) 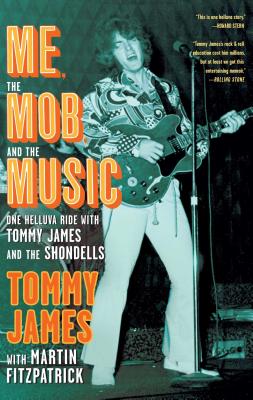 By Tommy James, Martin Fitzpatrick (With)
$17.00
Available for special order

Now in paperback, after five hardcover printings, Tommy James’s wild and entertaining true story of his career—part rock & roll fairytale, part valentine to a bygone era, and part mob epic—that “reads like a music-industry version of Goodfellas” (The Denver Post).

Everyone knows the hits: “Hanky Panky,” “Mony Mony,” “I Think We’re Alone Now,” “Crimson and Clover,” “Crystal Blue Persuasion.” All of these songs, which epitomize great pop music of the late 1960s, are now widely used in television and film and have been covered by a diverse group of artists from Billy Idol to Tiffany to R.E.M. Just as compelling as the music itself is the life Tommy James lived while making it.

James tells the incredible story, revealing his complex and sometimes terrifying relationship with Roulette Records and Morris Levy, the legendary Godfather of the music business. Me, the Mob, and the Music is a fascinating portrait of this swaggering, wildly creative era of rock ’n’ roll, when the hits kept coming and payola and the strong-arm tactics of the Mob were the norm, and what it was like, for better or worse, to be in the middle of it.

Tommy James (born Thomas Gregory Jackson, April 29, 1947, Dayton, Ohio) is the pop-rock star best known as the leader of Tommy James and the Shondells. Performing locally in Niles, Michigan, from the age of 12, James went on to record many top hits, including "Hanky Panky," "I Think We're Alone Now," "Mony Mony," "Crimson and Clover," "Sweet Cherry Wine," "Mirage," "Do Something to Me," "Gettin’ Together," "Crystal Blue Persuasion," and "Draggin' the Line." He has sold over 100 million records, has been awarded twenty-three gold singles, and nine gold and platinum albums. His songs are widely used in television and film, and have been covered by Joan Jett, Billy Idol, Tiffany, Tom Jones, Prince, and R.E.M. Tommy James continues to tour the country and record.

"Tommy James's story is one of the most interesting of any of the 1960s rockers. . . . His story reads like a music-industry version of 'Goodfellas.'"--Denver Post

“A boisterous memoir . . . It’s high time that [Tommy James] had a book to himself.”

"Tommy James' rock & roll education cost him millions, but at least we got this entertaining memoir."--Rolling Stone

"This is one helluva story."--Howard Stern