Lacrosse: A History of the Game (Paperback) 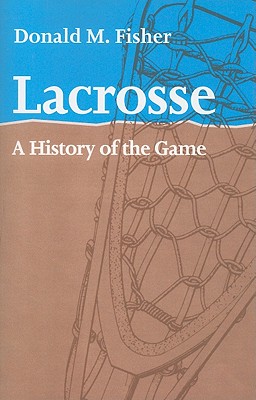 A comprehensive history of modern lacrosse, from the appropriation of the Native American game to its ever-increasing popularity today.

North America's Indian peoples have always viewed competitive sport as something more than a pastime. The northeastern Indians' ball-and-stick game that would become lacrosse served both symbolic and practical functions--preparing young men for war, providing an arena for tribes to strengthen alliances or settle disputes, and reinforcing religious beliefs and cultural cohesion. Today a multimillion-dollar industry, lacrosse is played by colleges and high schools, amateur clubs, and two professional leagues.

In Lacrosse: A History of the Game, Donald M. Fisher traces the evolution of the sport from the pre-colonial era to the founding in 2001 of a professional outdoor league--Major League Lacrosse--told through the stories of the people behind each step in lacrosse's development: Canadian dentist George Beers, the father of the modern game; Rosabelle Sinclair, who played a large role in the 1950s reinforcing the feminine qualities of the women's game; Father Bill Schmeisser, the Johns Hopkins University coach who worked tirelessly to popularize lacrosse in Baltimore; Syracuse coach Laurie Cox, who was to lacrosse what Yale's Walter Camp was to football; 1960s Indian star Gaylord Powless, who endured racist taunts both on and off the field; Oren Lyons and Wes Patterson, who founded the inter-reservation Iroquois Nationals in 1983; and Gary and Paul Gait, the Canadian twins who were All-Americans at Syracuse University and have dominated the sport for the past decade.

Throughout, Fisher focuses on lacrosse as contested ground. Competing cultural interests, he explains, have clashed since English settlers in mid-nineteenth-century Canada first appropriated and transformed the primitive Mohawk game of tewaarathon, eventually turning it into a respectable gentleman's sport. Drawing on extensive primary research, he shows how amateurs and professionals, elite collegians and working-class athletes, field- and box-lacrosse players, Canadians and Americans, men and women, and Indians and whites have assigned multiple and often conflicting meanings to North America's first--and fastest growing--team sport.

Donald M. Fisher is a professor of history at Niagara County Community College.