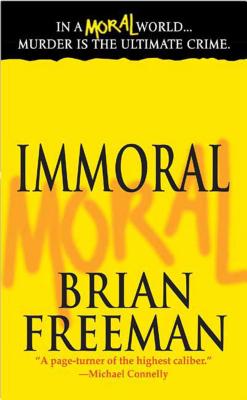 This is book number 1 in the Jonathan Stride series.

In a riveting debut thriller, Brian Freeman's Immoral weaves obsession, sex, and revenge into a story that grips the reader with vivid characters and shocking plot twists from the first page to the last.

Lieutenant Jonathan Stride is suffering from an ugly case of déjà vu. For the second time in a year, a beautiful teenage girl has disappeared off the streets of Duluth, Minnesota—gone without a trace, like a bitter gust off Lake Superior. The two victims couldn't be more different. First it was Kerry McGrath, bubbly, sweet sixteen.

Brian Freeman is the internationally bestselling author of psychological suspense novels featuring detectives Jonathan Stride and Serena Dial. His books have been sold in 46 countries and 18 languages. His debut thriller, Immoral, won the Macavity Award and was a nominee for the Edgar, Dagger, Anthony, and Barry awards for best first novel. His other novels include The Bone House, The Burying Place, In the Dark, and Stalked. Brian is drawn to complex characters, and says, “My stories are about the hidden intimate motives that draw people across some terrible lines.” Brian and his wife, Marcia, have lived in Minnesota for more than twenty years.

“In this compelling debut thriller, Freeman turns in a psychologically gripping, virtuoso performance, with a detective who is likely to return. He deftly lays bare the demons lurking in many of us while keeping us tantalized through a series of plot shifts. Highly recommended.” —Library Journal (starred review)

“Immoral is a slick and savvy offering and the best debut mystery in quite some time.” —BookPage

“[Immoral] may very well be one of the best debuts of 2005...a near pitch-perfect first novel that soars with believable characters, crisp dialogue and, for the most part, logical twists and turns...Jonathan Stride literally strides onto the page, flawed, complicated, and very appealing.” —South Florida Sun-Sentinel

“In one of the more thrilling debuts to come along in a while, Freeman takes the reader on a gloriously chilling ride through a world where nothing is as it seems.” —New Mystery Reader magazine

“With Stride, Freeman has created a world-weary detective with a strong moral compass and determination. Tightly written with a strong sense of place and character…a compelling read.” —Dallas Morning News

“Immoral is an excellent book, filled with a masterfully complex plot with twists that makes this into a real page-turner. Look for Immoral, and when you find it do not pass by it. Brian Freeman takes suspense writing to another level. You do not want to miss this book.” —ReviewingTheEvidence.com

“[B]e warned. In the manner of the finest thrillers, nothing is as it seems in Freeman's devilish story of revenge and double-cross.” —Orlando Sentinel

“Breathtakingly real and utterly compelling, Immoral dishes up page-turning psychological suspense while treating us lucky readers to some of the most literate and stylish writing you'll find anywhere today.” —Jeffery Deaver, author of The Twelfth Card and Garden of Beasts

“The writing is tough, muscular and shot through with such a sense of loss, torment, longing, torn innocence that it's downright Celtic in its sorrow. Just as the reader and Stride figure to have the case wrapped, there's a sucker punch you never saw coming--and it hurts wonderfully. The novel is reminiscent of Lehane, of such works as Gone Baby Gone, and Sacred, when Lehane was writing this darkest, bruised, compassionate self. Freeman's novel is one hell of a read, gut wrenching and moving, exciting and powerful. Any book that makes you want to fly to Vegas gets my bet. Stride on.” —Ken Bruen, author of The Killing of the Tinkers

“Who is Brian Freeman? This guy can tell a story. Immoral is a page-turner of the highest caliber. It has enough twists and turns to keep you guessing until the end.” —Michael Connelly, author of The Closers