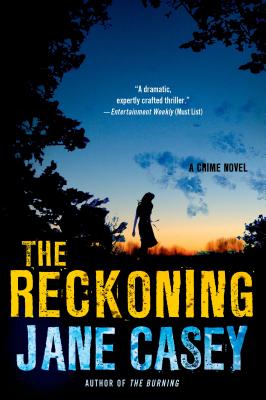 This is book number 2 in the Maeve Kerrigan Novels series.

To the public, he's a hero: a brutal killer who targets sex offenders. To most of London's police force, he's the suspect in a gruesome, time-consuming case to be avoided. But to Detective Constable Maeve Kerrigan, he's a murderer—no matter the sins of his victims—and catching him is her job. Assigned to the case with the division's unreadable new DI, Josh Derwent, young and inexperienced Maeve is determined to prove she has what it takes to make it as a female in the tough world of the London police.

But for a killer who strikes with such spectacle, this one is proving remarkably elusive. And when Maeve learns his motive might be about exacting revenge, his acts of incredible violence move from abstract justice to the intensely personal, and become all the more terrifying. Unsure whom she can trust even within her own department and knowing her life is at stake, Maeve will have to decide how far she's willing to go to ensure justice is served.

Jane Casey's taut, brilliantly executed thriller The Reckoning will have readers on the edge of their seats from the opening chapter to the stunning conclusion.

“Casey has succeeded in writing another impossible-to-put-down thriller with surprising plot twists and well-developed, intriguing characters. Readers will want to know what happens to Kerrigan next!” —Library Journal (starred review)

“Genuinely suspenseful and extremely well written with just a touch of The Internet Is Going to Kill You, The Reckoning will keep readers turning pages long into the night and pushing the book on friends the next day.” —RT Book Reviews (4½ stars, Top Pick)

“In sharp and supple prose, Casey illustrates both the nitty-gritty work and the keen instincts that solve crimes in this police procedural with a feminist bent, a worthy sequel to the well-received The Burning.” —Booklist

“An enticing mix of police work, romance, evildoers, sex, and sexism. . .Casey surrounds Kerrigan, an appealing blend of confidence and self-doubt, with a large cast of well-drawn characters, including Godley and Skinner. Admirers of Elizabeth George's ensemble police mysteries will find a lot to like.” —Publishers Weekly

“Astute, complex, layered--and very twisted. You'll remember this one for a long time.” —Lee Child on The Burning

“Casey rarely puts a foot wrong in this enthralling example of a bait-and-switch novel. . .Parallel first-person narratives from either side of the thin blue line contribute hugely to the novel's page-turning quality, although the author's success here is largely due to her superb characterizations. . .The Burning confirms that she's a talent to watch.” —Irish Times on The Burning