Thornapple Girl: One Family Against the Lumber Trust (Paperback) 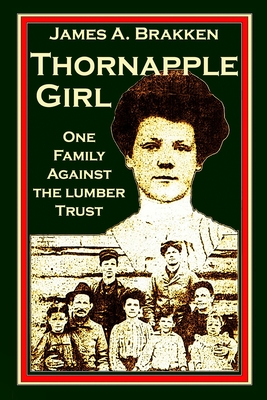 Step into the life of Myra Dietz, a girl whose voice is as sweet as her determination is strong. Meet Myra's father, John, a steadfast Northwest Wisconsin woodsman who confronts the world's largest lumber syndicate.

When John asks for his back wages, the lumber company refuses. He then learns that the dam they've been using for log drives is on his land. The syndicate could lose millions. But rather than settle, they respond with government corruption. Warrants are issued for John's arrest. Shots are fired. Newspapermen flock to Sawyer County. Headlines explode coast-to-coast

Get to know this struggling but loving family, once regarded nationwide as champions of the working class. Stand with them against the lumber syndicate controlled by the eighth-wealthiest American ever, timber tycoon, Frederick Weyerhaeuser.

Raise your fist with Myra Dietz, perhaps Wisconsin's bravest heroine of all time. But watch out-the Winchesters are loaded and bullets will soon fly

- Based on news accounts, court records, and Myra's personal recollections.

- Complete with 107 illustrations, press clippings, and excerpts from Myra's 1929 memoir.

- Written for adults, yet suitable for younger readers.

- Available from BadgerValley.com along with the complete 1929 Myra Dietz memoir, The Heroine of Cameron Dam, lost in 1930, now found again and finally about to make its first public debut.