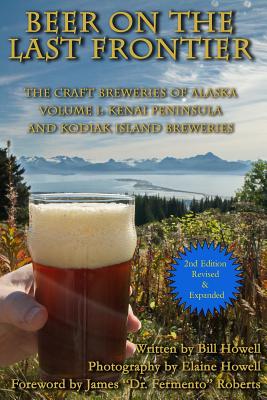 Beer on the Last Frontier is the first series of books ever written that focuses exclusively on the craft breweries and brewpubs of Alaska. It is an exploration of and guide to the numerous craft breweries of The Great Land and the exceptional beers they are brewing. Volume I covers the breweries of the Kenai Peninsula and Kodiak Island. Volume II covers Anchorage, Fairbanks, and all points in between. Volume III covers Southeast Alaska. These books are not intended to be stand-alone guidebooks to Alaska. Rather, they should be viewed as guidebooks specifically for the craft beer lover, which will enable any visitor or tourist who is particularly interested in experiencing craft beer in Alaska to do so most effectively. 2nd EDITION: REVISED AND EXPANDED This volume, The Kenai Peninsula and Kodiak Island Breweries, covers the five breweries and two brewpubs located in these two regions of Alaska in detail. Profusely illustrated with b&w photographs and containing interviews with the brewers, it also provides detailed information to aid the visitor to Alaska, such as driving directions, operating hours, as well as beer lists and tasting notes for each of the craft breweries. Besides detailed information on each of the breweries, the book also offers suggestions on bars, restaurants, and liquor stores in the regions which offer good selections of craft beers from the 49th state. Alaska is unique in its climate, its wildlife and the people who live there. Is it any surprise that its beers are unique as well? Beers, wines, ciders, meads, distilled spirits: they are all made commercially in Alaska. And not just made, but made well. Alaska's alcoholic beverages are the frequent winners of awards in national and even international competitions. There are 30+ commercial breweries in Alaska, two wineries, a cidery, a meadery, and five distilleries. Not bad for a state with under 800,000 total residents. So if you will be traveling to Alaska and enjoy craft beer, this guidebook is a must.

Bill Howell has been an avid home brewer and lover of craft beer for over twenty years. He was born and reared in New Orleans, Louisiana, and discovered a love of beer at an early age. He attended Tulane University on a Navy ROTC scholarship and upon graduation in 1984 began a career in nuclear submarines. During his career in the US Navy, he discovered homebrewing and American craft beer. In addition, while serving, he had the opportunity to sample the best beers from around the world. His duty stations included a three-year stint in London, which allowed him to visit pubs and breweries all across Britain and Western Europe. After retiring from the Navy in 2004, Bill moved to Alaska and created a beer appreciation course entitled The Art and History of Brewing, which he teaches annually at the University of Alaska. He blogs about the Alaskan craft brewing scene at Drinking on the Last Frontier (www. alaskanbeer.blogspot.com). He also writes a monthly beer column for his local newspaper, The Redoubt Reporter and is the Alaska Correspondent for the Northwest Brewing News magazine. In February 2010, Bill was selected as the Wynkoop Brewing Company's 2010 Beerdrinker of the Year at the annual competition in Denver, Colorado. Bill is currently working on revising and updating Beer on the Last Frontier: The Craft Breweries of Alaska. His latest books are Alaska Beer: Liquid Gold in the Land of the Midnight Sun, which was published by The History Press in May, 2015, and a revised and updated 2nd edition of Kenai Peninsula and Kodiak Island Breweries (Volume I of Beer on the Last Frontier), published in October, 2016. Bill lives in Sterling, Alaska on the Kenai Peninsula along with his wife Elaine and their three cats.