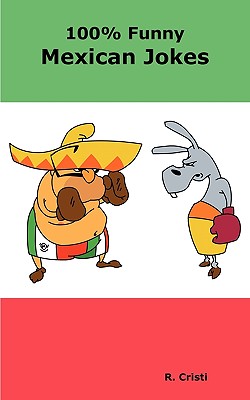 Some random Mexican jokes from the book:

A big tough Mexican man married a good-looking Mexican lady and after the wedding, laid down the following rules: "Honey, I'll be home when I want, if I want and at what time I want - and I don't expect any hassle from you. I expect a great dinner to be on the table unless I tell you otherwise. I'll go hunting, fishing, boozing, and card-playing when I want with my old buddies and don't you give me a hard time about it. Those are my rules Any comments?"

His lovely new bride said, "No, that's fine with me. Just understand that there'll be sex here at eight o'clock every night - whether you're here or not."

A German, an Australian, and a Mexican are on a plane. They say that they can tell where they are by sticking their hands out of the pane.

The German sticks his hand out and says "We are in Germany." The others ask, "How do you know," the German says, "Because it's so cold."

Then the Australian sticks his hand out and says "We are in Australia," the others ask "How do you know," he replies "Because it's so warm."

Then the Mexican sticks his hand out and back in. He says " We are in Mexico," the others ask "How do you know," he says " Because my watch is gone"

Did you hear about that one Mexican that went to college? Yeah.. me neither.

How do you stop a Mexican tank? Shoot the guy pushing it.

What do you call a Mexican without a lawn mower? Unemployed.

What do you do when a Mexican is riding a bike? Chase after him, it's probably yours

Why are Mexicans so short? They all live in basement apartments.

Why do Mexicans re-fry their beans? Have you seen a Mexican do anything right the first time?

How come there aren't any Mexicans on Star Trek? They don't work in the future, either.

What do you call a Mexican in a two-story house? Adopted.

Why do Mexican kids walk around school like they own the place? Because their dads built it and their mom clean it.

2 Mexicans are in a car, who is driving? A cop.