Return to Wake Robin: One Cabin in the Heyday of Northwoods Resorts (Hardcover) 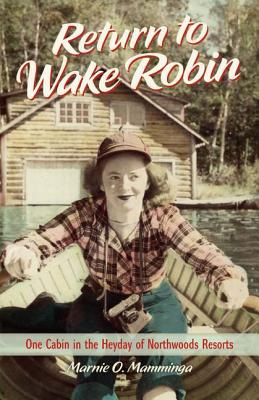 Published by the Wisconsin Historical Society Press, this series of historical essays just received a starred review from Publisher's Weekly! It takes place on Big Spider Lake at the 1929 log cabin that has been the author's summer retreat for five generations. This would make a great gift for anybody who has enjoyed family get togethers in the northwoods. Think Mother's Day, Father's Day, Birthdays, and Graduations! P.S. Marnie has been a longtime Redbery customer. - Bev, Redbery Books, Cable, Wisconsin — From Notable

Five generations of Marnie O. Mamminga’s family have been rejuvenated by times together in Wisconsin’s Northwoods. In a series of evocative remembrances accompanied by a treasure trove of vintage family photos, Mamminga takes us to Wake Robin, the cabin her grandparents built in 1929 on Big Spider Lake near Hayward, on land adjacent to Moody’s Camp. Along the way she preserves the spirit and cultural heritage of a vanishing era, conveying the heart of a place and the community that gathered there.

Bookended by the close of the logging era and the 1970s shift to modern lake homes, condos, and Jet Skis, the 1920s to 1960s period covered in these essays represents the golden age of Northwoods camps and cabins—a time when retreats such as Wake Robin were the essence of simplicity. In Return to Wake Robin, Mamminga describes the familiar cadre of fishing guides casting their charm, the camaraderie and friendships among resort workers and vacationers, the call of the weekly square dance, the splash announcing a perfectly executed cannonball, the lodge as gathering place. By tracing the history of one resort and cabin, she recalls a time and experience that will resonate with anyone who spent their summers Up North—or wishes they had.

Marnie O. Mamminga has vacationed every summer on Big Spider Lake near Hayward, Wisconsin. Born and raised in the Chicago area, she attended the University of Illinois at Urbana-Champaign, where she earned undergraduate and master’s degrees in English. Over the years she raised three sons, taught junior high and high school English, and worked as a freelance writer and columnist. Her publishing credits include the Chicago Tribune, Reader’s Digest, the Christian Science Monitor,Lake Superior Magazine, and several Chicken Soup for the Soul books. She has been married to her high school sweetheart for more than forty years and is so very grateful that her grandchildren love the Northwoods as much as she does.

"Mamminga's memoir will make readers wish for a cabin of their own to call home for a couple of months out of the year. (Andi Diehn, ForeWord Reviews)

"All thanks to Marnie Mamminga for her splendid collection of recollections about the heyday of Northwoods resorts. She has caused a flood of memories of some of the best times of my life. In the 1940s and '50s, for my family, Up North was a magical, almost mythical place where we spent three weeks every summer. We always stayed at Ross' Teal Lake Lodge. The cabins and lodge were rustic and simple, perfect for Up North and so different from our home in Madison. Here the air seemed fresher and the sky seemed bluer." (Howard Mead, former editor of Wisconsin Trails magazine)