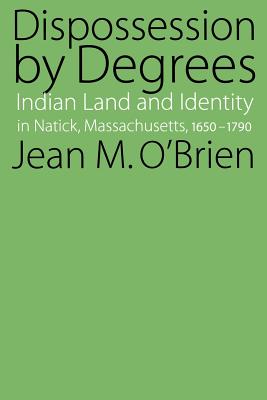 Despite popular belief, Native peoples did not simply disappear from colonial New England as the English extended their domination in the seventeenth and eighteenth centuries. Rather, the Native peoples in such places as Natick, Massachusetts, creatively resisted colonialism, defended their lands, and rebuilt kin networks and community through the strategic use of English cultural practices and institutions. So why did New England settlers believe that the Native peoples had vanished? In this thoroughly researched and astutely argued study, historian Jean M. O’Brien reveals that, in the late eighteenth century, the Natick tribe experienced a process of “dispossession by degrees,” which rendered them invisible within the larger context of the colonial social order, thus enabling the construction of the myth of Indian extinction.

Jean M. O’Brien is an associate professor of history at the University of Minnesota, where she is also affiliated with American studies, American Indian studies, and the Center for Advanced Feminist Studies.

“Readers will discover an astounding story of how Native peoples from different tribal backgrounds came together, adjusted to European concepts about land ownership, created a town, interacted with their non-Indian neighbors in land and other disputes, and still managed to maintain a sense of Indian identity. There is the clear perception that the Native Americans in the ‘Praying Town’ of Natick, Massachusetts, controlled their own destinies so far as possible.”—Choice
— Choice