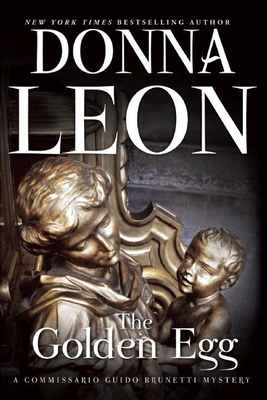 This is book number 22 in the Commissario Guido Brunetti Mysteries (Paperback) series.

From the undisputed crime fiction queen (Baltimore Sun), one of Comissario Guido Brunetti's most enigmatic cases: leading Donna Leon's iconic detective from the local dry cleaner all the way to Vienna's most elite aristocrats.

Over the years, Donna Leon's best-selling Commissario Guido Brunetti series has conquered the hearts of lovers of finely-plotted character-driven mysteries all over the world. Brunetti, both a perceptive sleuth and a principled family man, has exposed readers to Venice in all its aspects: its history, beauty, architecture, seasons, food, and social life, but also the crime and corruption that seethe below the surface of La Serenissima.

In The Golden Egg, as the first leaves of autumn begin to fall, Commissario Guido Brunetti's wife Paola comes to him with a request. The mentally handicapped man who worked at their dry clearers has suffered a fatal sleeping pill overdose, and Paola loathes the idea that he lived and died without anyone noticing or helping him. To please her, Brunetti investigates the death and is surprised to find nothing on the man: no birth certificate, no driver's license, no credit cards. As far as the Italian government is concerned, he never existed. And yet, there is a body. As secrets unravel, Brunetti suspects an aristocratic family might be connected to the case. But why would anyone want this sweet, simple-minded man dead?

Donna Leon, born in New Jersey in 1942, has worked as a travel guide in Rome and as a copywriter in London. She taught literature in universities in Iran, China, and Saudi Arabia. Commissario Brunetti made her books world-famous. Donna Leon lived in Italy for many years, and although she now lives in Switzerland, she often visits Venice.

Appreciative of feminine charms, the deeply uxorious Brunetti amply displays the keen intelligence and wry humor that has endeared this series to so many.”Publishers Weekly

[Readers] will savor the pleasures of dialogue as elliptical in its way as Henry James and a retrospective shock when they finally appreciate the import of the tale’s unobtrusive opening scene and its sly title.”Kirkus Reviews