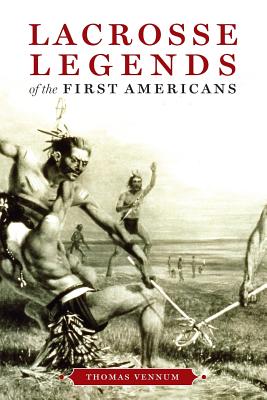 An ancient Native American sport, lacrosse was originally played to resolve conflicts, heal the sick, and develop strong, virile men. In Lacrosse Legends of the First Americans, Thomas Vennum draws on centuries of oral tradition to collect thirteen legends from five tribes--the Cherokee, Ho-Chunk (Winnebago), Seneca, Ojibwa, and Menominee. Reflecting the game's origins and early history, these myths provide a glimpse into Native American life and the role of the Creator's Game" in tribal culture.

From the Great Game in which the Birds defeated the Quadrupeds to high-stakes contests after which the losers literally lost their heads, these stories reveal the fascinating spiritual world of the first lacrosse players as well as the violent reality of the original sport. Lacrosse enthusiasts will learn about game equipment, ritual preparations, dress, and style of play, from stick handling to scoring. They will discover how the coach--a medicine man--conjured potions to prevent game injuries or make the opponent's leg cramp as well as how early craftsmen identified the perfect tree--marked by a lightning strike--from which to carve a lacrosse stick.

The game is no longer played by large numbers of men on mile-long fields, and plastic, titanium, and nylon have replaced hickory and ash, leather, and catgut. As lacrosse continues to evolve, this collection will help us remember and understand its rich and complex history.

Thomas Vennum is senior ethnomusicologist emeritus at the Center for Folklife Programs and Cultural Studies, Smithsonian Institution, Washington, D.C. He is the author of American Indian Lacrosse: Little Brother of War. He is retired and living in Tucson, Arizona, where he continues research among Indian tribes in Sonora, Mexico, specifically the Seri.