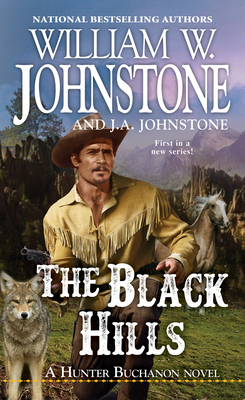 This is book number 1 in the A Hunter Buchanon Black Hills Western series.

Meet Hunter Buchanon, a towering mountain of a man who learned how to track prey in Georgia, kill in the Civil War, and prospect in the Black Hills of Dakota. Now he’s trying to live a peaceful gun-free life—but fate has other plans for him . . .

A MAN AND HIS COYOTE

When Hunter Buchanon rescued a wounded coyote pup—and named him Bobby Lee—he had no idea the cute little varmint would grow up to be such a loyal companion. Coyotes aren’t known to be man’s best friend. Most of them are as fierce and wild as the Black Hills they roam. But Bobby Lee is different. When Hunter is ambushed on the road, Bobby Lee leaps to his defense. And when the attacker tries to shoot Bobby Lee, Hunter returns the favor by hitting the man with a rock. By the time the smoke clears, the coyote-loving ex-Confederate is covered in blood—and the other guy’s got a knife in his chest. Now Hunter has to explain it all to the local sheriff. Which is going to be tough. Because the man he just killed is the sheriff’s deputy . . .

William W. Johnstone is the New York Times and USA Today bestselling author of over 300 books, including the series THE MOUNTAIN MAN; PREACHER, THE FIRST MOUNTAIN MAN; MACCALLISTER; LUKE JENSEN, BOUNTY HUNTER; FLINTLOCK; THOSE JENSEN BOYS; THE FRONTIERSMAN; SAVAGE TEXAS; THE KERRIGANS; and WILL TANNER: DEPUTY U.S. MARSHAL. His thrillers include BLACK FRIDAY, TYRANNY, STAND YOUR GROUND, and THE DOOMSDAY BUNKER. Visit his website at www.williamjohnstone.net or email him at dogcia2006@aol.com.

Being the all-around assistant, typist, researcher, and fact checker to one of the most popular western authors of all time, J.A. Johnstone learned from the master, Uncle William W. Johnstone.

“Every day with Bill was an adventure story in itself. Bill taught me all he could about the art of storytelling. ‘Keep the historical facts accurate,’ he would say. ‘Remember the readers, and as your grandfather once told me, I am telling you now: be the best J.A. Johnstone you can be.’”