Gringos in Paradise: An American Couple Builds Their Retirement Dream House in a Seaside Village in Mexico (Paperback) 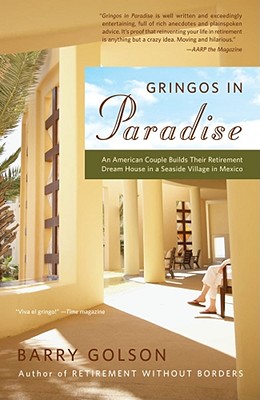 A Year in Provence meets Mr. Blandings Builds His Dream House in this lively and entertaining account of a couple's year building their dream house in Mexico.

In 2004, Barry Golson wrote an award-winning article for AARP magazine about Mexican hot spots for retirees longing for a lifestyle they couldn't afford in the United States. A year later, he and his wife Thia were taking part in the growing trend of retiring abroad. They sold their Manhattan apartment, packed up their SUV, and moved to one of those idyllic hot spots, the surfing and fishing village of Sayulita on Mexico's Pacific coast.

With humor and charm, Golson details the year he and his wife spent settling into their new life and planning and building their dream home. Sayulita -- population 1,500, not including stray dogs or pelicans -- is a never-dull mixture of traditional Mexican customs and new, gringo-influenced change. Before long, the Golsons had been absorbed into the rhythms and routines of village life: they adopted a pair of iguanas named Iggy Pop and Iggy Mom, got sick and got cured by a doctor who charged them sixteen dollars a visit, made lasting friends with Mexicans and fellow expatriates, and discovered the skill and artistry of local craftsmen.

But their daily lives were mostly dedicated to the difficult yet satisfying process of building their house. It took them almost six months to begin building -- nothing is simple (or speedy) in Mexico -- and incredibly, they completed construction in another six. They engaged a Mexican architect, builder, and landscape designer who not only built their home but also changed their lives; encountered uproariously odd bureaucracy; and ultimately experienced a lifetime's worth of education about the challenges and advantages of living in Mexico.

The Golsons lived (and are still living) the dream of many -- not only of going off to a tropical paradise but also of building something beautiful, becoming a part of a new world, making lasting friends, and transforming their lives. As much about family and friendship as about house-building, Gringos in Paradise is an immensely readable and illuminating book about finding a personal paradise and making it a home.

Barry Golson tried to retire, but put it on hold to launch a travel website for Forbes.com. He and his wife Thia are also researching a new book on living abroad to be called Retirement Without Borders. Golson is a former editor of the Playboy interviews, TV Guide, and Yahoo! Internet Life. He has written for The New York Times, the Los Angeles Times, Ski, and Salon. His article for AARP on Mexico won a Lowell Thomas award. He and Thia divide their time between New York and Sayulita, and look forward someday to re-retiring.

"Golson combines wry humor with personal experience in this highly entertaining and informative account of life on Mexico's Pacific coast. His descriptions of the sights, sounds, smells and rhythms of daily village life and insights into Mexican culture and customs are among the best I've ever read. Though not specifically a how-to retirement guide, the book is packed with invaluable, neighbor to neighbor tips. Unlike the usual dry, factual, sleep-inducing retirement guides, I enjoyed this one cover to cover. If Gringos In Paradise doesn't give you the Mexico itch, check your vital signs!" -- Carl Franz, author of The People's Guide to Mexico

"I love risk-takers and Barry Golson is one of them. Consider this: Most Americans don't travel outside the U.S. and fewer than 23 per cent even have passports! But where does it say in the manual you can't broaden your horizons? Golson is a perfect and literal example of someone who's done just that. For all the rest of you, he's also proof that if you define a goal as a dream with a deadline, there's no end to what you can accomplish -- and experience." -- Peter Greenberg, Travel Editor, NBC Today Show

"Not just a useful tale of house-building in the Mexican tropics, but a funny, touching story of how both men and women can be re-invigorated by the challenge of change in their lives." -- Karen Blue, author of Midlife Mavericks: Women Reinventing Their Lives in Mexico

"This is a great personal story about the choices the boomer generation now faces and about opting for a vigorous life change in the power years." -- Ken Dychtwald, Ph.D., author of The Power Years: A User's Guide to the Rest of Your Life

"As all wise expats know, paradise isn't a place -- it's a state of mind. Golson's book tells about building a retirement house in Mexico, but between the lines it's really about the harder job of building a new life. I won't be surprised if Gringos in Paradise becomes the newest bona fide Boomer Bible." -- James Morgan, author of Chasing Matisse: A Year in France Living My Dream

"Gringos in Paradise is well written and exceedingly entertaining, full of rich anecdotes and plainspoken advice. It's proof that reinventing your life in retirement is anything but a crazy idea. Moving and hilarious." -- AARP the Magazine

"Golson's overarching experience is one of amiability, creativity, honesty, openhandedness, and a zest for life." -- San Francisco Chronicle