The Metamorphosis, in the Penal Colony and Other Stories: The Great Short Works of Franz Kafka (Paperback) 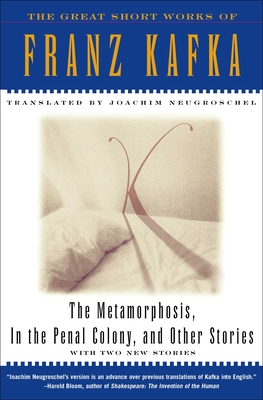 Including his most widely recognized short works, as well as two new stories, this translation of Franz Kafka’s writings illuminate one of the century’s most controversial writers.

Translated by PEN translation award-winner Joachim Neugroschel, The Metamorphosis, In the Penal Colony, and Other Stories has garnered critical acclaim and is widely recognized as the preeminent English-language anthology of Kafka's stories.

Neugroschel’s translation of Kafka's work has made this controversial and monumental writing accessible to a whole new generation. This classic collection of forty-one great short works—including such timeless pieces of modern fiction as "The Judgment" and "The Stoker"—now includes two new stories, "First Sorrow" and "The Hunger Artist."

Franz Kafka was born in Prague in 1883, where he lived until his death in 1924. Widely esteemed as one of the twentieth century's most important writers, he is the author of the novels The Trial and The Castle.

Harold Bloom author of Shakespeare: The Invention of the Human Joachim Neugroschel's version is an advance over previous translations of Kafka into English.

Joseph Coates Chicago Tribune In Neugroschel's version we see more of Kafka's meaning, his unexpected comedy....In this version, we have for the first time the sense of understanding Kafka's complexity and where it might lead us.

Ronald Hayman author of K: A Biography of Kafka and Proust Joachim Neugroschel has provided something that was badly needed -- an accurate translation of Kafka's stories into English. Kafka is difficult to translate, and the version we all know -- by Edwin and Willa Muir -- is full of mistakes. Neugroschel's translation is much closer to Kafka's German.

Václav Havel In Kafka, I have found a portion of my own experience of the world, of myself, and of my way of being in the world.