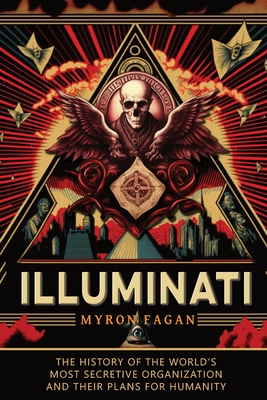 "If there was only one book to get on the subject, this would be it. Great history - should be required reading." - reader review

"Useful to tie my knowledge segments together. This book explains why we should stay aware of new happenings to see if they tie in to the end of our sovereignty." - reader review

In 1967, Myron Fagan released a three-LP set titled Illuminati. This recording has been transcribed (you can hear the original audio here) and the text has been used to create this edition, published in 2017 by A Distant Mirror in paperback, Kindle and epub formats.

Myron Fagan reveals the plot for global enslavement launched two centuries ago by Adam Weishaupt, an apostate Catholic priest who, financed by the House of Rothschild, created the organisation which he named the 'Illuminati'. Fagan describes how this group has been used by the House of Rothschild to work towards a world government, and how every war during the past two centuries has been instigated by them.

He describes how Jacob Schiff was sent to the United States by the Rothschilds to further the Illuminati plot, and how he was able to gain control of both the Democratic and Republican parties. He shows how Schiff seduced the American Congress and Presidents so as to achieve control of our financial system, and create the cancer of income tax. He also reveals how Schiff and his co-conspirators created the Council on Foreign Relations, in order to control our elected officials and gradually lead the U.S. into becoming part of a luciferian world government.

In short, this is the fascinating, horrifying - and factual - story of the most sensational plot in the history of the world. Fagan lays out the history of the Illuminati, exposing the plot for a single world government. The author gives names, dates, organizations, modes of operations - all exposing the Satanic octopus that to this day seeks to strangle the world in its grip. This book exposes the entire history of the plot - the Rothschilds, Zionism, the Luciferian ideology, the destruction of national sovereignty and religions, the role of Freemasonry, the Illuminist banksters and media, and the plans for three World Wars.