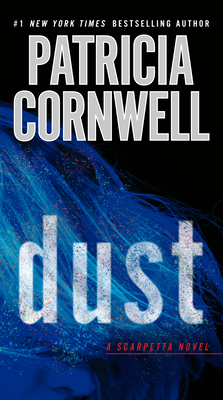 This is book number 21 in the Scarpetta series.

With unparalleled high-tension suspense and the latest in forensic technology, Patricia Cornwell once again proves her exceptional ability to surprise—and to thrill—in this electrifying Kay Scarpetta novel.

A body, oddly draped in an unusual cloth, has just been discovered inside the sheltered gates of MIT, and it’s suspected the identity is that of missing computer engineering grad student Gail Shipton, last seen the night before at a trendy Cambridge bar. It appears she’s been murdered, mere weeks before the trial in her $100 million lawsuit against her former financial manager, and Massachusetts Chief Medical Examiner Kay Scarpetta doubts it’s a coincidence. She also fears the case may have a connection with her computer genius niece, Lucy.

In Dust, Scarpetta and her colleagues are up against a force far more sinister than a sexual predator who fits the criminal classification of a “spectacle killer.” The murder of Gail Shipton soon leads deep into the dark world of designer drugs, drone technology, organized crime, and shocking corruption at the highest levels.

Patricia Cornwell is considered one of the world's bestselling crime writers. Her intrepid medical examiner Kay Scarpetta first appeared on the scene in 1990 with Postmortem—the only novel to win the Edgar, Creasey, Anthony, and Macavity awards and the French Prix du Roman d'Aventure in a single year—and Cruel and Unusual, which won Britain's prestigious Gold Dagger Award for the best crime novel of 1993. Dr. Kay Scarpetta herself won the 1999 Sherlock Award for the best detective created by an American author. Ms. Cornwell's work is translated into 36 languages across more than 120 countries.

“Cornwell's strength remains the intricate details of forensic examinations as her heroes fight to uncover both a serial killer and a high-level cover-up.”—Publishers Weekly

“Cornwell’s grasp on her beloved character is as sure as ever.”—Liz Smith

More Praise for Patricia Cornwell and the Scarpetta Novels

“When it comes to the forensic sciences, nobody can touch Cornwell.”—The New York Times Book Review

“Cornwell certainly is skilled at dissecting the not always attractive innards of human nature.”—Forbes

“Cornwell gets her Hitchcock on...[She] can generate willies with subtle poetic turns.”—People

“A story so compelling that even longtime readers will be stunned by its twists and turns.”—Chicago Tribune