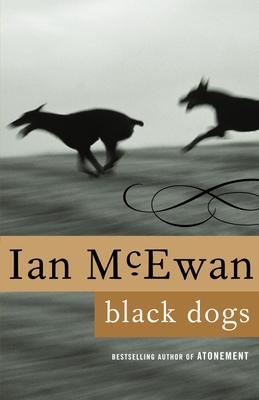 Set in late 1980s Europe at the time of the fall of the Berlin Wall, Black Dogs is the intimate story of the crumbling of a marriage, as witnessed by an outsider.

Jeremy is the son-in-law of Bernard and June Tremaine, whose union and estrangement began almost simultaneously. Seeking to comprehend how their deep love could be defeated by ideological differences Bernard and June cannot reconcile, Jeremy undertakes writing June's memoirs, only to be led back again and again to one terrifying encouner forty years earlier—a moment that, for June, was as devastating and irreversible in its consequences as the changes sweeping Europe in Jeremy's own time. In a finely crafted, compelling examination of evil and grace, Ian McEwan weaves the sinister reality of civiliation's darkest moods—its black dogs—with the tensions that both create love and destroy it.

"Brilliant. . . . [A] meditation on . . . the intoxications and the redemptive power of love." —The New Yorker

"The novel's vision of Europe is acute and alive, vivid in its moral complexities . . . we are conquered by the humanity, the urgency, of the novel's characters." —The New York Times Book Review

"Each scene is brilliantly lit, and has a characteristically strange fascination as Ian McEwan juxtaposes 'huge and tiny currents' to show the ways in which individuals react to history." —The New York Review of Books